Information current as of 2020
In Vermont, a person (developer) may need a permit from the Department of Motor Vehicles (DMV) to operate a vehicle over state highways and/or certain town highways in excess of the legal limits on weight and dimension. The limits and permits are governed by Vt. Stat. Ann. tit. 23 §§1400 and 1402. 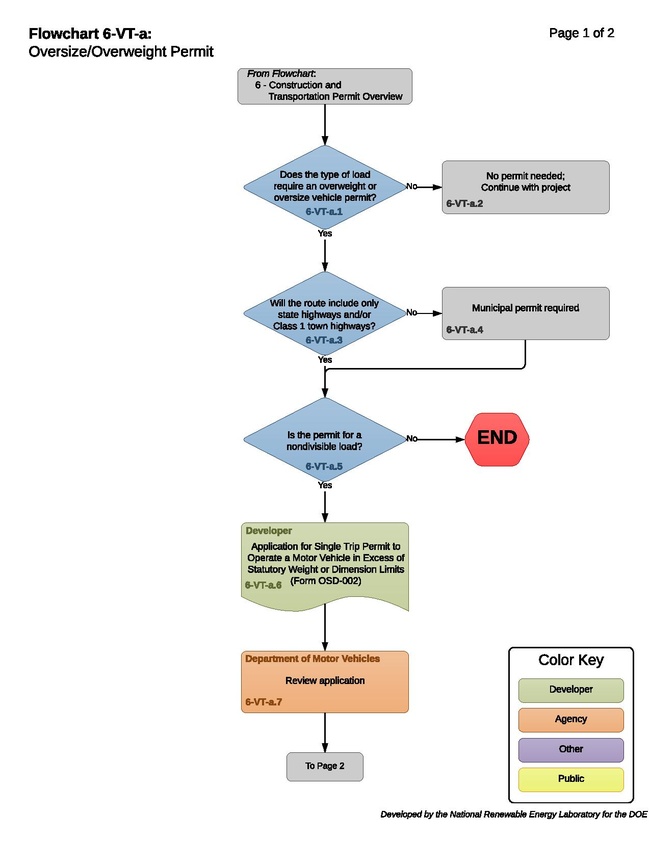 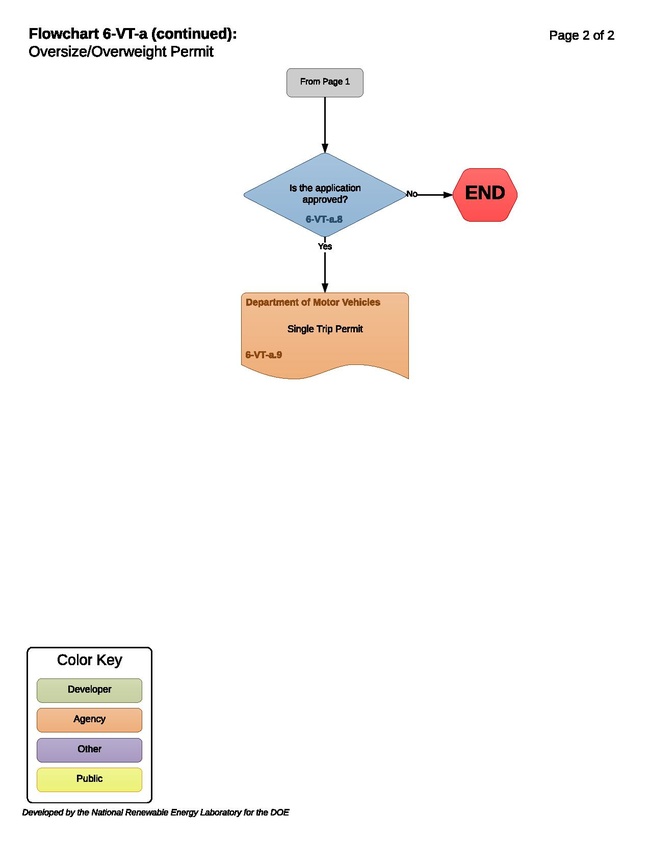 6-VT-a.1 to 6-VT-a.2 — Does the Type of Load Require an Overweight or Oversize Vehicle Permit?

If the planned route includes only state highways and/or Class 1 town highways, the permit will be issued by the state Department of Motor Vehicles (DMV). If the route includes only class 2, class 3, or class 4 town highways, the developer may need to obtain additional required permits from the local permitting authority (Vt. Stat. Ann. tit. 23 §1400(c)). If the planned route includes state highways or Class 1 town highways; and class 2, class 3, or class 4 highways; then the developer must obtain a permit from both the state DMV and the local permitting authority.

Vermont DMV will only issue a Single Trip Permit (STP) for nondivisible loads. A nondivisible load is defined as any load or vehicle exceeding the legal limits on dimension in weight which, if separated into smaller loads or vehicles, would:

The developer must submit an application (Form OSD-002) to the Commercial Vehicle Operations Unit of Vermont’s DMV. The application may be submitted by mail, or fax. There is a required fee of $35.

The DMV will review the application for completeness and to determine whether issuance of an STP is permitted under applicable law and regulation. Generally, a permit may be denied for just cause including, but not limited to, providing false information on application, continued violation of the rules governing overweight/over dimension operation and/or repeated violation of similar laws or regulations. In addition, the policy of the DMV is to consider public safety and convenience, and protect Vermont’s highway system.

If the DMV approves the application, it will issue an STP. An STP is an authorization granted for the movement of a nondivisible load between specified points over a predetermined route, all prescribed within the permit. STP’s may be issued to the person or firm who will transport the vehicle or load to cover a single trip within ten working days of the issuance. An approval may be withdrawn for just cause and administrative penalties may apply (see Vermont Rules and Instructions Governing Overweight and Overdimension Vehicle Permits, p. 29). In addition, law enforcement officers may void and/or confiscate any STP for violation of any condition.

Numerous restrictions apply to STP’s including operation on certain holidays, during certain hours, and during inclement weather. In addition, certain transport requirements will apply to signage, escort vehicles, police escort, flaggers, and flags/lights. Details about restrictions and requirements can be found in the (Vermont Rules and Instructions Governing Overweight and Overdimension Vehicle Permits, p. 22 to 28).

Retrieved from "https://openei.org/w/index.php?title=RAPID/Roadmap/6-VT-a&oldid=998879"
Categories:
OpenEI is developed and maintained by the National Renewable Energy Laboratory with funding and support from the U.S. Department of Energy and a network of International Partners & Sponsors.