Information current as of 2020
In Illinois, a person (developer) may need a Construction Stormwater General Permit (Permit) from the Illinois Environmental Protection Agency (Illinois EPA) for construction projects that disturb one (1) or more acres of land or are part of a common plan of development or sale that will disturb one (1) or more acres of land. A developer needs a Permit to remain in compliance with the National Pollutant Discharge Elimination System (NPDES) of the Clean Water Act (CWA). Illinois EPA implements the state’s Construction Stormwater Discharge Program in Il. Admin. Code tit. 35 Subtitle C, pursuant to the authority provided in Il. Comp. Stat. §5/13, 5/13.3, 5/27. 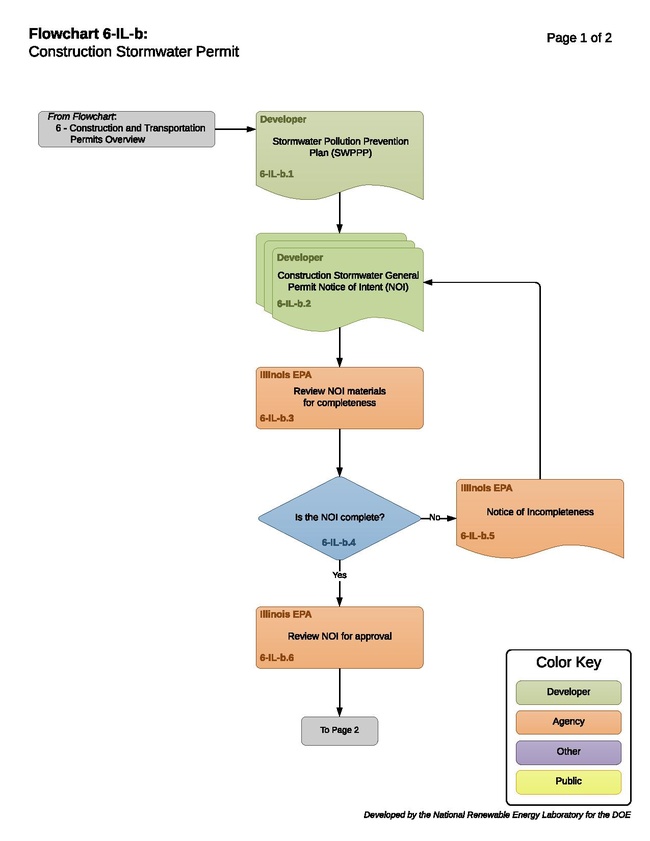 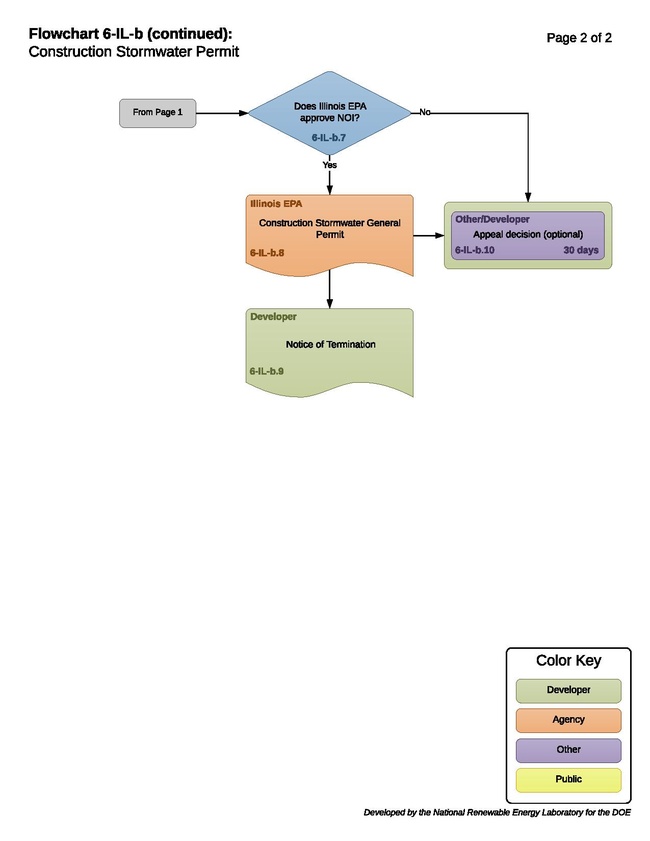 The developer must develop a Stormwater Pollution Prevention Plan (SWPPP) and submit the SWPPP to Illinois EPA. The SWPPP must, at minimum, include:

The developer must submit a Construction Stormwater Notice of Intent (NOI) to Illinois EPA. The NOI can be submitted in hard copy or electronically. The developer should submit the NOI at least 30 days before the start of construction. The NOI must include:

After receiving the NOI and accompanying SWPPP, Illinois EPA reviews the NOI for administrative and technical completeness. If the NOI is incomplete, Illinois EPA sends a Notice of Incompleteness letter to the developer. Illinois EPA NPDES Permit for Construction Activities Webpage.

If Illinois EPA approves the NOI, Illinois EPA issues a Permit to the developer. The Permit is subject to several standard conditions, including:

The developer must complete and submit a Notice of Termination (NOT) to Illinois EPA once the site has undergone final stabilization. Final stabilization is defined as the time when “all land disturbing activities are complete and a uniform perennial vegetative cover with a density of 70 percent of the cover for unpaved areas and areas not covered by permanent structures has been established or equivalent permanent stabilization measures have been used.” Illinois EPA NPDES Permit for Construction Activities Webpage. The NOT can be send to Illinois EPA by mail or email. The NOT must include:

If Illinois EPA accepts and approves the NOT, the project is no longer has coverage under the Permit.

Illinois EPA’s decision to issue or deny a Permit can be appealed to the Illinois Pollution Control Board within 30 days after Illinois EPA issues its decision. Il. Admin. Code tit. 35 §309.181.

Retrieved from "https://openei.org/w/index.php?title=RAPID/Roadmap/6-IL-b&oldid=980587"
Categories:
OpenEI is developed and maintained by the National Renewable Energy Laboratory with funding and support from the U.S. Department of Energy and a network of International Partners & Sponsors.