Information current as of 2020
In Alaska, a person (developer) may need a Alaska Storm Water Construction General Permit (General Permit) from the Alaska Department of Environmental Conservation (ADEC) before engaging in construction activities that discharge stormwater into waters of the U.S (either directly or through a stormwater conveyance system) and will either disturb one or more acres of land or are part of a common plan of development or sale that will ultimately disturb one or more acres of land. General Permit, § 1.4.1; General Permit, §§ 1.4.1 – 1.4.2. 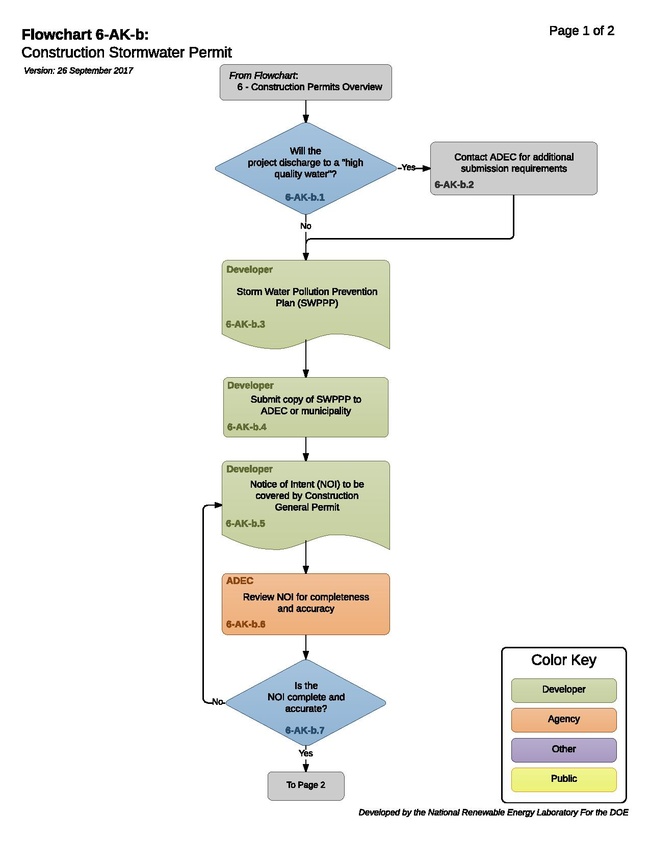 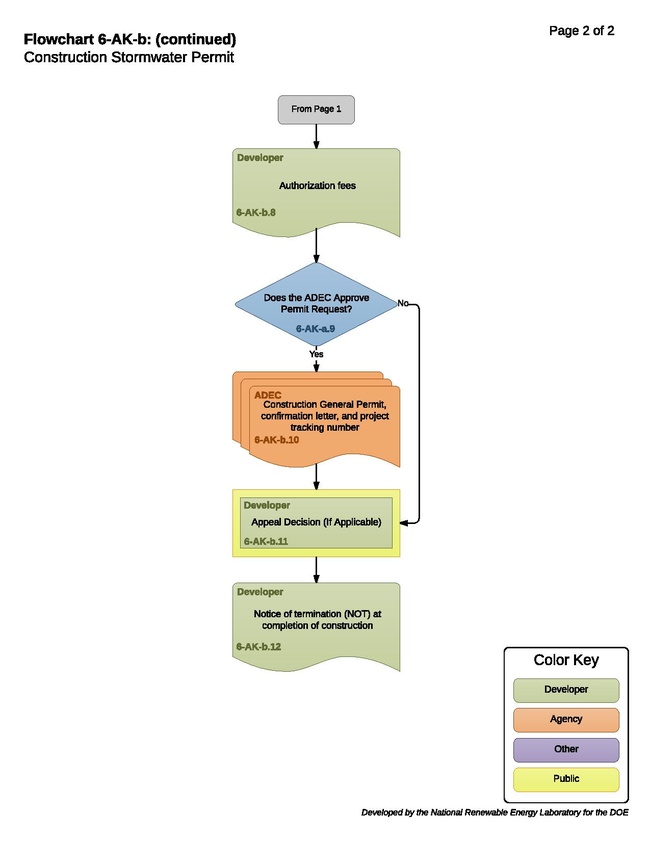 The developer for a construction activity that may discharge to a high quality water that constitutes an outstanding national resource, such as a water of a national or state park or wildlife refuge or a water of “exceptional recreational or ecological significance,” must contact the ADEC 30 days prior to the planned start of construction activities to discuss additional submittal requirements.

The developer must create a SWPPP for each site covered by the permit, and the SWPPP must document the pollution control measures implemented at the site. General Permit, § 5.1. The purpose of the SWPPP is to document consideration of site-specific conditions in the selection, design, installation, and implementation of control measures used to comply with the requirements set forth in General Permit, §§ 3.0-4.0.

A SWPPP may also need to contain the information outlined in General Permit, §§ 5.5-5.6 if the project discharges stormwater into an Impaired Water Body (a body of water with an EPA-established or approved Total Maximum Daily Load) or into a body of water listed on Alaska’s 303(d) List of Impaired Waters (Category 5) for turbidity or sediment. General Permit, §§ 3.2, 5.5-5.6.

6-AK-b.4 - Submit Copy of SWPPP to the ADEC or Appropriate Municipality

6-AK-b.5 - Notice of Intent (NOI) to be Covered by Construction General Permit

The developer must submit a complete and accurate Notice of Intent (NOI) in one of three ways:

The developer must submit the NOI at least five (5) days before beginning construction activities. Physical copies may take additional time to be approved, and the developer should remember that submission of an NOI is purely a demonstration of intent to be covered by the permit, not a determination that all eligibility requirements have been met. General Permit, § 2.2.2, 2.3.1. However, submission of a complete and accurate NOI eliminates the need for the developer to submit an application for an individual discharge permit unless otherwise notified by the ADEC. Fact Sheet, § 4.2.2.

After the developer submits the NOI, the ADEC will review the NOI for completeness and accuracy. The ADEC will not authorize discharges if any of the following conditions exist:

A complete NOI must include the following elements:

6-AK-b.9 - Does the ADEC Approve the Permit Request?

If the ADEC decides to grant discharge authorization through a general permit, the developer receives written confirmation via email, including a specific authorization number and a date at which time the discharge of stormwater may begin. The ADEC usually grants authorization following receipt of a complete NOI and payment of the general permit fee. However, projects that do not meet the following additional eligibility requirements will not receive approval. The project must:

If the ADEC decides not to grant discharge authorization through a general permit, the developer may appeal the decision.

In some cases, authorization initially may not be granted due to evidence of a reasonable potential for the discharge to cause or contribute to an exceedance above state water quality standards. The ADEC will then notify the developer of the need for an individual permit, project modifications, or other corrective actions before granting authorization. General Permit, § 1.4.4.2; Fact Sheet, § 4.2.5.

Following the delivery of a final decision through the agency appellate process above, the developer or another aggrieved party may appeal the decision to the Alaska Superior Court within 30 days from the date the decision was mailed or distributed, as per rule 602 of the Alaska Rules of Appellate Procedure. Alaska R. App. Proc. 602; Alaska Stat. § 22.10.020. Additional guidance for the appeals process is available within Alaska’s Appellant Instructions for Administrative Appeals to the Superior Court.

6-AK-b.12 - Notice of Termination (NOT) at Completion of Construction

The developer must include the following information in their NOT:

The developer can submit the NOT one of two ways:

The developer’s authorization to discharge terminates at midnight on the day the NOT is signed. General Permit, §10.3.2.

Retrieved from "https://openei.org/w/index.php?title=RAPID/Roadmap/6-AK-b&oldid=986777"
Categories:
OpenEI is developed and maintained by the National Renewable Energy Laboratory with funding and support from the U.S. Department of Energy and a network of International Partners & Sponsors.