A developer must obtain a geothermal lease from the New Mexico State Land Office (NMSLO) to develop geothermal resources on state lands under the New Mexico Geothermal Resources Act and regulations promulgated in N.M. Admin. Code part 19.2.7. Leases must generally be greater than 650 acres and not more than 2,560 acres. 19.2.7.10 NMAC.

The leasing process generally applies to geothermal leases on state trust lands shown to be open upon the tract books of the NMSLO. 19.2.7.9 NMAC. The leasing process also applies to “miscellaneous lands,” which are state lands that are controlled by school districts or state agencies. Miscellaneous lands require a written request for leasing by the governing board of public officials having jurisdiction over such lands before an application for their lease will be reviewed. In addition, where the developer’s lease of miscellaneous lands will involve appropriation of water, the developer must obtain written permission from the state engineer, filed with the Commissioner, before water is appropriated. 19.2.7.13 NMAC.

Note: Within the NMSLO, the Commissioner (“Commissioner”) of public lands has broad authority prior to and during the application process to withhold state trust lands in the best interests of New Mexico or reject applications and offer them to the public for a competitive leasing process. 19.2.7.18-19 NMAC. The Commissioner’s authority derives from Article XIII, Section 2 of the Constitution of the State of New Mexico. 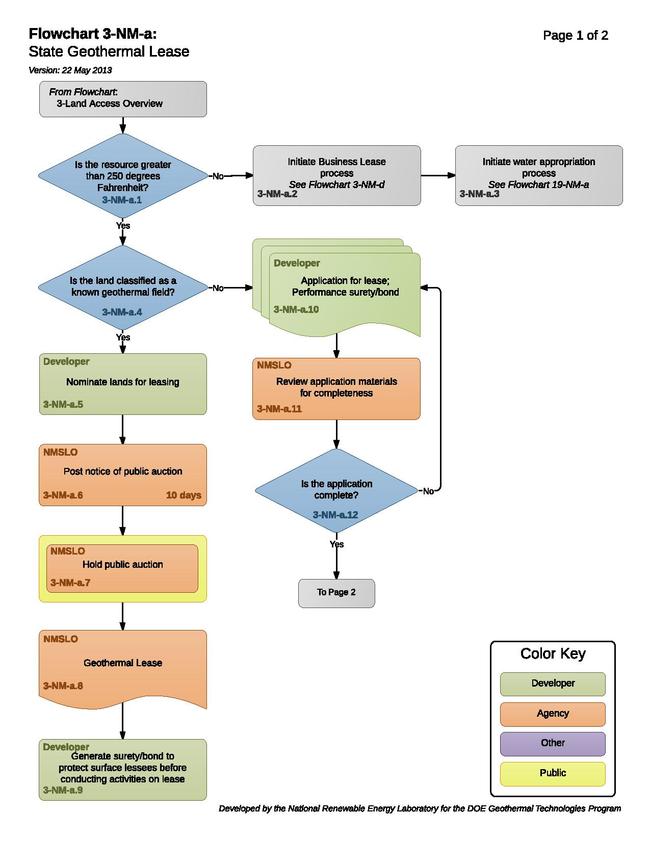 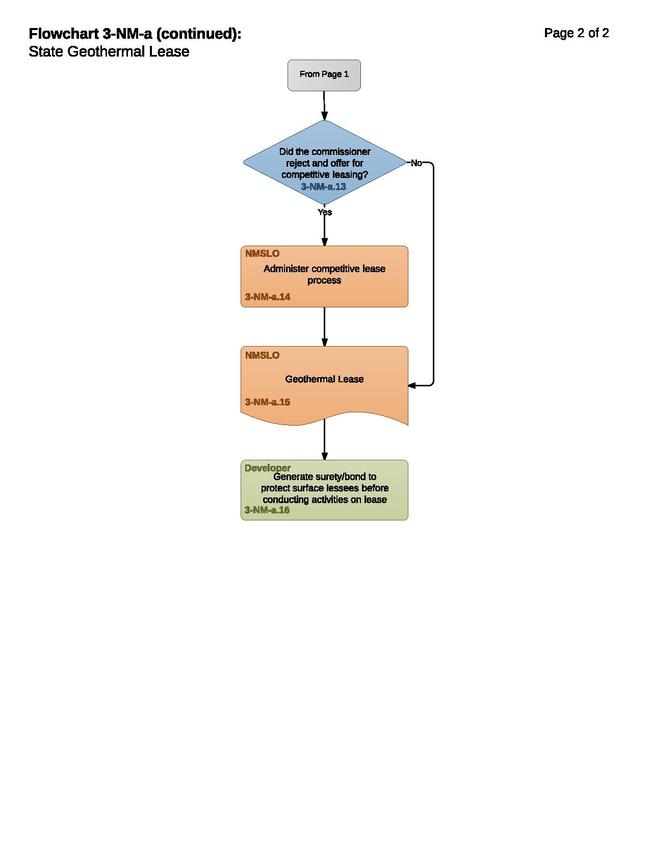 Developers may still lease state trust lands for the purposes of developing “low-temperature” geothermal resources (where the heat and/or water extracted is 250 degrees Fahrenheit or less) by initiating the State Business Lease:
3-NM-d.

In addition, developers engaging in “low-temperature” geothermal resource (where the heat and/or water extracted is 250 degrees Fahrenheit or less) development must go through the New Mexico Office of the State Engineer (NMOSE) and abide by all applicable New Mexico state water laws, rules, and procedures - as described in Water Access and Water Rights Issues Overview:
19-NM-a

3-NM-a.4 – Is the Land Classified as a Known Geothermal Field?

Under New Mexico's Geothermal Resources Act, land classified as a “known geothermal field” may only be leased by oral bids at a public auction. Such lands are noted in the NMSLO tract books and unavailable for leasing by application. 19.2.7.20 NMAC.

Public auction sales, whether by sealed or oral bids, are ordinarily held on the third Thursday of each month. 19.2.7.21 NMAC. A successful bidder at an oral-bid public auction will be required to pay, on or before the close of business on the date of sale, the filing fee, first year’s rental and bonus. 19.2.7.24 NMAC.

The application must be in the form required by the Commissioner, as outlined in N.M. Admin. Code section 19.2.7.27. All applications must contain a non-refundable fee of $30 along with the amount of first year’s rental and bonus offered (if any) and an appraisal of the value of the land for lease made by a disinterested party. 19.2.7.10 NMAC. For application purposes, rentals are calculated at a minimum of $1 per acre unless otherwise specified by the commissioner. In addition, applications must include a performance bond or other surety in an amount set by the Commissioner necessary to guarantee payment of royalties. Developers may choose to submit a surety/bond in the amount of $25,000 to cover both the performance and surface protection bonds. 19.2.7.38 NMAC. Developers should generally submit both a performance and surface bond/surety during the application phase or soon after because the Commissioner generally will not issue a lease unless both bonds are in place.

Applications received in the same delivery of open mail are deemed “simultaneous applications” and are disposed of in one of the following ways, as determined by the Commissioner:

The NMSLO will reject applications not accompanied by the proper fees outlined in 3-NM-a.9. Applications that are incomplete for other reasons will be returned to the applicant. 19.2.7.11 NMAC.

3-NM-a.13 – Did the Commissioner Reject and Offer for Competitive Leasing?

At any point during the application process, the Commissioner may reject a complete application and offer the tract for competitive leasing, either by sealed bidding or oral public auction. 19.2.7.19 NMAC.

Note that the Commissioner can reject all bids if he deems the bids too low or not in the best interests of the trust. 19.2.7.23 NMAC.

Before conducting any activities on the lease, the developer must submit an adequate surety/bond to the Commissioner in an amount not less than $5,000 to protect surface owners or lessees from potential damage. 19.2.7.37 NMAC. In the case where a developer supplied a $25,000 bond for both performance and surface protection, as described in 3-NM-a.10 above, the developer has satisfied all bonding requirements and may disregard this element. Note that the Commissioner may choose not to issue a lease if both bonds are not in place. Developers are encouraged to satisfy both bonding requirements during the application phase.

Retrieved from "https://openei.org/w/index.php?title=RAPID/Roadmap/3-NM-a&oldid=898831"
Categories:
OpenEI is developed and maintained by the National Renewable Energy Laboratory with funding and support from the U.S. Department of Energy and a network of International Partners & Sponsors.