If the land in question is privately owned or state owned, Alaska has control over the geothermal resource. Alaska is unique in its state ownership of minerals under private land. However, Alaska does give preferential right to whomever owns the surface. ( Alaska Statutes 38.05.181).

The Alaska Division of Oil and Gas within the Alaska Department of Natural Resources oversees the geothermal resource leasing process in the State of Alaska. The process is essentially a two pronged approach to leasing lands, either competitive or noncompetitive. Competitive leasing occurs when multiple parties are bidding for the development of a certain tract of land. Noncompetitive leasing occurs through a geothermal prospecting permit when there is little interest in the initial call for applications by the DO&G. In either process, the surface owner (if other than the state) will have a preference right to either match the high bid or to obtain their own prospecting permit should they choose to do so.

More information on the geothermal leasing process and information on current lease sales by DO&G, including public notice of applications, can be found on the ADNR Geothermal Leasing webpage. 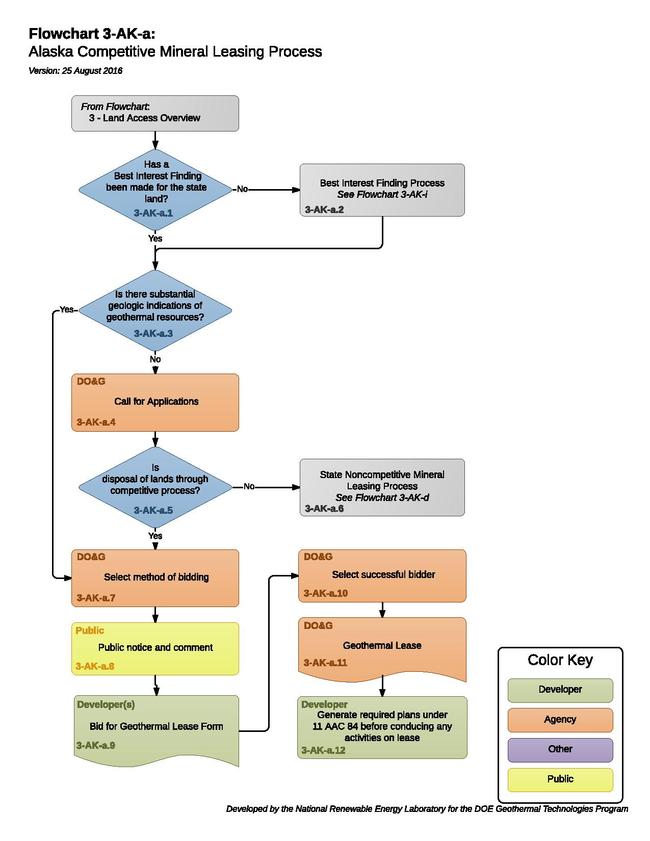 Any disposal of geothermal resources must be preceded by a determination that the disposal is in the best interest of the State of Alaska ( AS 38.05.035(e); 11 AAC 84.700). The DO&G Director determines in a written finding that such action is in the state’s interest. In the written finding, known as a "best interest finding," the director considers and discusses certain topics required by law, such as the reasonably foreseeable effects of the disposal on the area's fish and wildlife, historic and cultural resources, and communities. The director also considers comments received during the public comment period and applicable laws and regulations. The director takes a hard look at the relevant facts and issues known at the time and uses a reasoned approach to balance the potential positive and negative effects of the disposal given the mitigation measures and other protections in effect. The director then makes a finding of whether or not, on balance, the lease, sale, or disposal is or is not in the state's best interest.

The best interest finding is a part of the state environmental process in Alaska and the developer should ensure that the steps in the following flowchart are met before proceeding in the leasing process.

The following findings and supplements have been recently issued by the DO&G: Best Interest Findings - Exploration & Geothermal Licenses.

3-AK-a.3 - Is there Substantial Geologic Indication of Geothermal Resources

If DO&G finds that there is substantial geologic indications of geothermal resources a call for applications may not be necessary. The DO&G may, in its discretion, designate areas for disposal by competitive lease and conduct a disposal without a call for applications if all available geologic information indicates a substantial likelihood of commercial geothermal resources is present in the area ( 11 AAC 84.720(d)).

Acreage limitations are as follows: parcels must be at least 40 acres but not more than 2,560 acres; and any person may not own or hold an interest in leases covering more than 51,200 acres outside of commercial production.

3-AK-a.5 to 3-AK-a.6 - Is Disposal of Lands Through Competitive Process

DO&G will provide a public notice of the competitive bidding process selected and any applicable limitations that a successful bidder must follow. The notice must describe the land and interests in land to be offered for disposal, note public availability of any preliminary analysis, and contain any other information necessary to inform the public about the disposal. The notice should also provide the public an opportunity to comment regarding the proposed disposal of State lands ( 11 AAC 82.415).

The DO&G provides an example of a Bid Form.

The bid must be signed and submitted in the form designated by DO&G. Any bids submitted in any material alternation of the form may not be considered ( 11 AAC 82.420). Bidders must also comply with all of the relevant requirements in 11 AAC 82.200 and 11 AC 82.205 to be qualified bidders. To meet the qualification requirements the bidder must submit along with their Bid Form a statement stating that the bidder has met all relevant qualifications and requirements set forth in 11 AAC 82.200 and 11 AC 82.205. An example of instructions for bidders to the Mount Spurr Competitive Lease Sale No.3 (example) shows some of the relevant pre-qualification requirements and may provide some guidance for developers of future projects.

If there are two or more equal bids that are the highest bids received at the lease sale, DO&G will notify the bidders and invite them to submit new bids, not lower than the original bids. If the new bids fail to break the tie, DO&G will issue new invitations until the tie is broker (11 AAC 82.455).

The surface owner of the parcel, if held be a person other than the state, may exercise their preference right within 60 days after receiving notice of the acceptance of the bid for a lease ( AS § 38.05.181(a)). If the surface owner agrees to meet the terms of the successful bid, they will be awarded the final bid.

DO&G will notify all interested parties when the right to a lease is finally awarded. The successful bidder must wire transfer funds in the amount of the cash bonus, accrued interest and annual rental along with two fully executed copies of the lease form ( 11 AAC 82.465). The bidder must also submit a bond required under 11 AAC 84.790. The bond amount will be determine by DO&G, but will be no less than $10/acre or $10,000, whichever is greater. The bond covers any potential surface-damage and will be released back to the developer under the following conditions:

Statewide bonds do not satisfy the requirement of the surface-damage bond required for geothermal operation here but may be considered by DO&G when setting any amount of additional bond required (11 AAC 84.790). If any bidder fails to submit any of the required forms, bonds, etc. the amount deposited with the bid is forfeited to the state ( 11 AAC 82.465).

DO&G will also return the bid deposits of all unsuccessful bidders within 5 working days after a lease sale of the awarding of a geothermal prospecting permit. If the selected bidder is disqualified, the Commissioner may award the second and third highest bidders the opportunity to restore their bids and deposits within 10 days after receipt of the notice of the award ( 11 AAC 82.475).

Royalties & Payments All geothermal leases are subject to an annual rental, payable in advance, or $3/acre. The rental for the year will be credited against royalties during that year as a minimum payment for the geothermal lease ( AS § 38.05.181(e)).

Every geothermal lease will be conditioned on the payment of a royalty by the lessee of not less than 10% but no more than 15% of the gross revenues derived from the production, sale, or use of geothermal resources. Royalties may be taken in kind, rather than in value if DO&G determines that it would be in the best interest of the state ( AS § 38.05.181(g)).

3-AK-a.12 - Generate Required Plans Under 11 AAC 84 Before Conducting any Activities on Lease

A Plan of Operations, Plan of Exploration and Plan of Development must be completed according to 11 AAC 84 before any of the associated activities are conducted on leased lands. The developer should consult the Alaska Division of Oil and Gas and the appropriate regulations in 11 AAC 84 to determine the requirements for each of these plan submittals. The developer should also consider the state exploration process flowchart before conducting any exploratory activities.

Retrieved from "https://openei.org/w/index.php?title=RAPID/Roadmap/3-AK-a&oldid=941207"
Categories:
OpenEI is developed and maintained by the National Renewable Energy Laboratory with funding and support from the U.S. Department of Energy and a network of International Partners & Sponsors.