Information current as of 2020
In California, developers may have to comply with the Sustainable Groundwater Management Act of 2014 (SGMA) which is the state-wide regulatory framework for groundwater in California. The SGMA requires state water basins to impose, over a period, a plan toward the sustainable management of basin groundwater to eliminate adverse groundwater in that basin. Each basin is required to establish a groundwater sustainability agency (GSA). If a GSA does not establish a plan, that basin's groundwater will be regulated by the SWRCB.

In California, percolating groundwater consists of all subsurface water not classified as a subterranean stream. Subterranean streams only include water that is closely related to or behaves like surface water (water flowing within a known and defined channel). Most groundwater in California is classified as percolating groundwater, treated separately from surface water. Generally, owners of lands overlying a groundwater basin or other common source of supply have the first right to withdraw water for a reasonable beneficial use on their overlying lands, and the right of each owner is equal and correlative to the right of all other owners similarly situated.

Most groundwater basins in California, particularly those with the highest demand in relation to supply, are managed pursuant to a judgment entered by a court in a groundwater adjudication. Most adjudicated basins are in Southern California where groundwater shortages and overdraft conditions have historically been greatest. However, newer adjudications have recently been completed to the north on the state’s central coast, e.g., Seaside, Los Osos and Santa Maria. 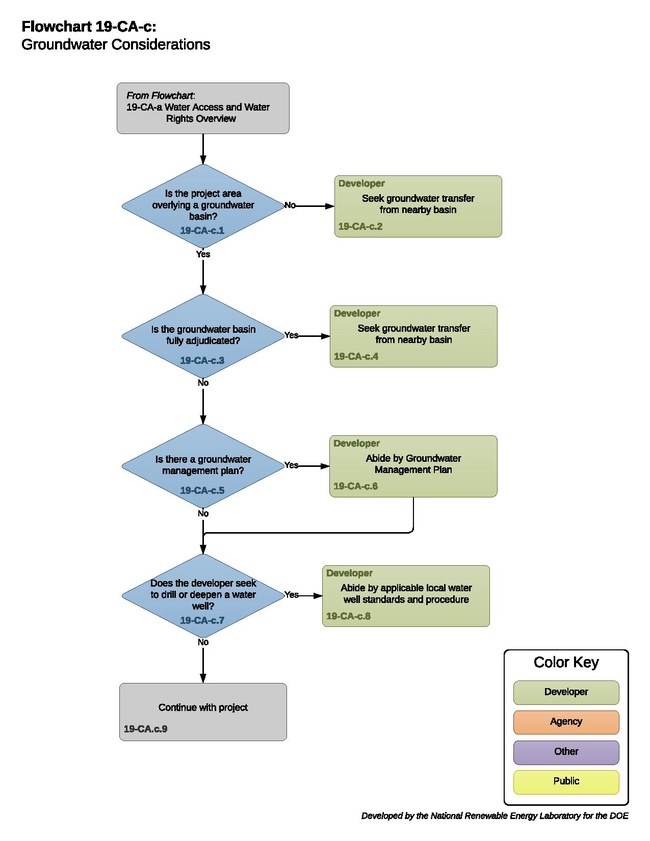 Only overlying landowners have rights to extract groundwater beneath their land. Where the project area is not overlying a known or potential groundwater basin, the developer must seek other means of acquiring groundwater, such as the execution of a groundwater transfer.

Section 10750 of the California Water Code allows for groundwater management by local agencies or a Watermaster, independent of other provisions of the California Water Code. There are approximately 600 water districts and associations in California, with contact information available here: Water Districts and Associations in California. The local management provision only applies to groundwater basins that are not critically overdrafted. However, Cal. Wat. Code §§ 4999 requires every person who extracts groundwater within the counties of Riverside, San Bernardino, Los Angeles, and Ventura in excess of 25-acre feet per annum to file a notice with the SWRCB on forms provided by the SWRCB. The following basins have since been added to the critically overdrafted list: Seaside, Los Osos and Santa Maria. Where there is a Groundwater Management Plan in place, typical plans limit overdraft and allow for recharge and storage of groundwater within the basin. Most importantly, Groundwater Management Plans imply that groundwater extraction is limited and restricted to some extent, thereby creating additional considerations and potential obstacles for a developer planning to use groundwater to satisfy the project need.

Initially, developers should consult the list of California Groundwater Management Plans, separated amongst the ten hyrdrological regions in California, review the plan and contact the applicable water district or county.

Acquiring groundwater as an overlying landowner generally requires the construction of a water well. The procedure and requirements for constructing water wells in California may differ depending on the county or water district rules. Water wells must conform to the local standards, which in most cases are modeled after the California Water Well Standards. The California Department of Water Resources (CDWR) estimates that, on average, 10,000 to 15,000 water wells are constructed in the 515 groundwater basins/subbasins in California every year. The general process will likely require some form of notice and/or a permit, followed by a completion report and inspection post-construction.

Retrieved from "https://openei.org/w/index.php?title=RAPID/Roadmap/19-CA-c&oldid=982419"
Categories:
OpenEI is developed and maintained by the National Renewable Energy Laboratory with funding and support from the U.S. Department of Energy and a network of International Partners & Sponsors.