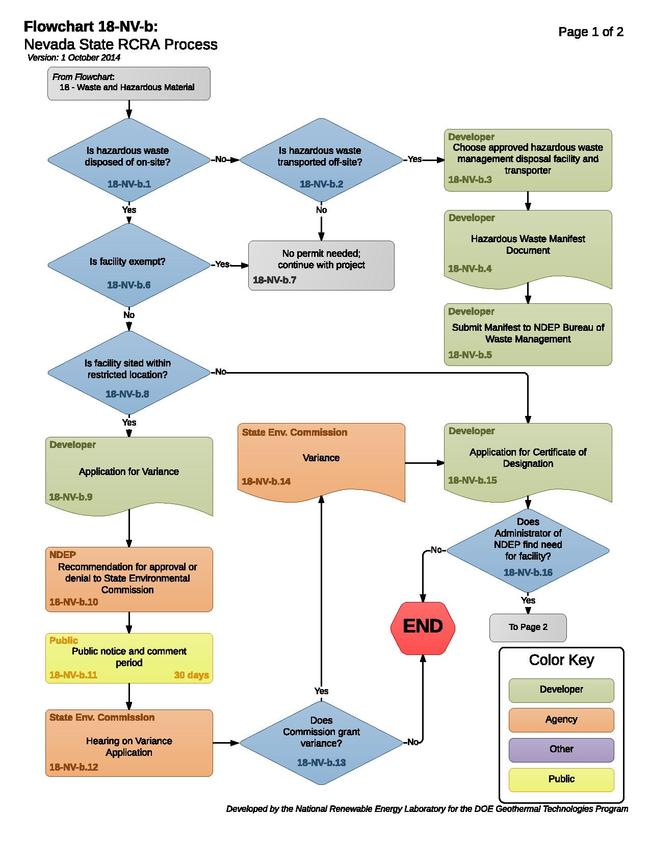 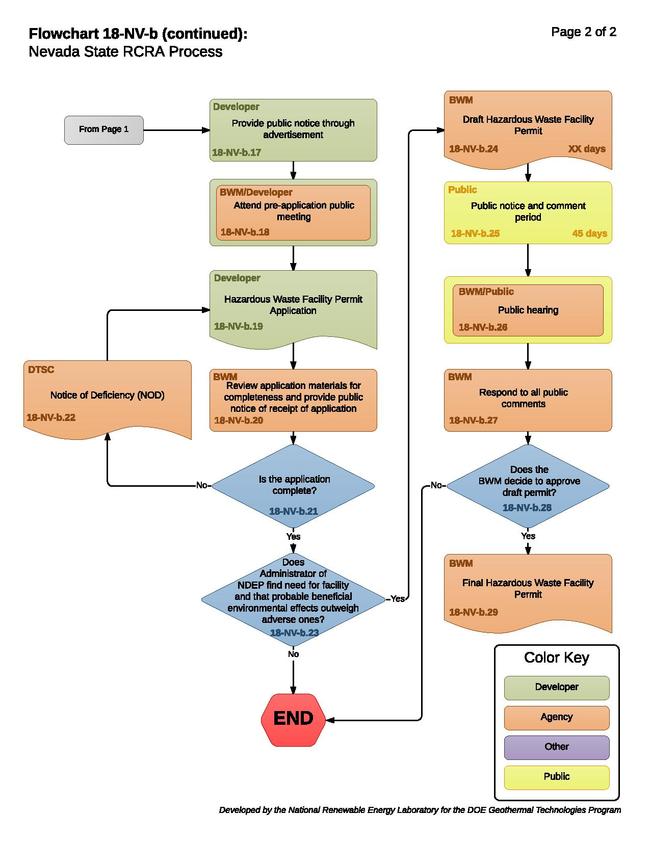 If hazardous waste is not disposed of on site and not transported off site, there is no permit required. The developer can continue with the project without considering hazardous waste requirements.

Completed manifest documents must be sent to NDEP, Bureau of Waste Management at the following address:

18-NV-b.8 – Is Facility Sited Within a Restricted Location

NAC 444.8456 provides a list of restricted locations for stationary facilities for the management of hazardous wastes. The list provides that no facility can be constructed within:

If the facility is located in a restricted location, the Developer will have the option of pursuing an application for a variance of the hazardous waste disposal regulations, NAC 444.842 to 444.8482. Consult the Nevada Administrative Code, Chapter 444, for additional information on the required contents of the variance application and applicable fees for review of the application.

18-NV-b.10 – Recommendation for Approval or Disapproval of State Environmental Commission

NAC 444.8476 requires NDEP to review the variance upon filing and payment of the appropriate fee and make a recommendation to the Nevada State Environmental Commission (NSEC) for approval or disapproval of the application.

Before an application is heard by the NSEC, a public notice and comment period is held for no less than 30 days.

After expiration of the notice and comment period, the application is heard before the NSEC at its next regularly scheduled meeting or at a meeting specially scheduled by the Chair of the NSEC.

NSEC will establish the duration of a variance in every instance, but in no event will a variance continue in force after the expiration of any permit issued by the NDEP for the facility involved. A variance can also be revoked by the NSEC if it finds, after notice to the operator and a hearing at which the owner or operator is given an opportunity to be heard, that there has been a violation of a condition of the variance, or that continued operation under the variance poses an unreasonable threat to the public health or violates minimum requirements for the protection of public health. The NSEC will review each variance at least once each year to ensure continuing compliance with the variance.

Sufficient applications for a Certificate of Designation must include the following information, according to NAC 444.8458, about the facility concerning:

The NDEP Administrator cannot issue a Certificate of Designation unless he/she determines, based on the application, that:

NDEP Application Fees NAC 444.8446 provides a schedule of maximum fees for different types of hazardous waste disposal facilities. The maximum fee must be deposited with NDEP and the staff will keep an accurate account of the time devoted to each application to deduct from the fee. Any remaining funds are returned to the Developer after deducting the appropriate fee for staff time and any amount paid to consultants.

After obtaining the appropriate Certificate of Designation from NDEP, the Developer should provide public notice of a public meeting concerning the application for a RCRA Hazardous Waste Facility Permit. The public notice must include:

NAC 444.8458 requires that any person proposing to construct or operate a new or expanding facility for the management of hazardous waste must submit an application for a permit or class 3 modification required by 40 CFR, Part 124, Subparts A and B, and 40 CFR 270, Subparts A through F.

The Bureau of Waste Management in Nevada (BWM) will announce the permit application submittal along with public notice including the following information:

18-NV-b.21 to 18-NV-b.22 – Does Administrator of NDEP Find Need for Facility and Probable Beneficial Environmental Effects Outweigh Adverse Ones

If the application is incomplete, the BWM will inform the developer through a Notice of Deficiency (NOD). The agency can keep the process open by sharing all NOD information with the public either through the administrative record, an information repository, or another public activity.

The BWM will issue a draft permit that may be accompanied by a Fact Sheet and Statement of Basis for the BWM issuing the draft permit if necessary. This information is open to the public for review and comment for 45 days according to 40 CFR 124.

Again, the final issued permit will be open to the public for review. Once issued, the permit requires the payment on or before March 1st of each year a fee to cover the cost of inspection and other regulation of the facility. The appropriate fee schedule can be found at NAC 444.845. Contact the BWM for more information concerning applicable fees for hazardous waste disposal sites or consult the NDEP regulations in NAC Chapter 444. Permits may not be issued for more than 5 year duration (NRS 459.520).

Retrieved from "https://openei.org/w/index.php?title=RAPID/Roadmap/18-NV-b&oldid=941386"
Categories:
OpenEI is developed and maintained by the National Renewable Energy Laboratory with funding and support from the U.S. Department of Energy and a network of International Partners & Sponsors.