The Clean Air Act is the law that defines EPA's responsibilities for protecting and improving the nation's air quality and the stratospheric ozone layer. The last major change in the law, the Clean Air Act Amendments of 1990, was enacted by Congress in 1990. Legislation passed since then has made several minor changes.

One of the major initiatives Congress added to the Clean Air Act in 1990 is an operating permit program for larger industrial and commercial sources that release pollutants into the air. Operating permits include information on which pollutants are being released, how much may be released, and what kinds of steps the source’s owner or operator is required to take to reduce the pollution. Permits must include plans to measure and report the air pollution emitted. The EPA has, for most states, authorized the state to administer the Clean Air Act for facilities within each states' boundaries. In such cases the state will issue permits under the Clean Air Act. States and tribes issue operating permits. If those governments do not do a satisfactory job of carrying out the Clean Air Act permitting requirements, EPA can take over issuing permits.

Operating permits are especially useful for businesses covered by more than one part of the Clean Air Act and additional state or local requirements, since information about all of a source’s air pollution is in one place. The permit program simplifies and clarifies businesses’ obligations for cleaning up air pollution and can reduce paperwork. For instance, an electric power plant may be covered by the acid rain, toxic air pollutant, and smog (ground-level ozone) sections of the Clean Air Act. The detailed information required by those separate sections is consolidated into one place in an operating permit. Businesses seeking permits pay a permit fee to the state or local agency overseeing the permit process. These fees pay for the air pollution control activities related to operating permits.

The 1990 amendments also strengthen EPA's power to enforce the Clean Air Act, increasing the range of civil and criminal sanctions available. In general, when EPA finds that a violation has occurred, the agency can issue an order requiring the violator to comply, issue an administrative penalty order (use EPA administrative authority to force payment of a penalty), or bring a civil action (sue the violator in court). 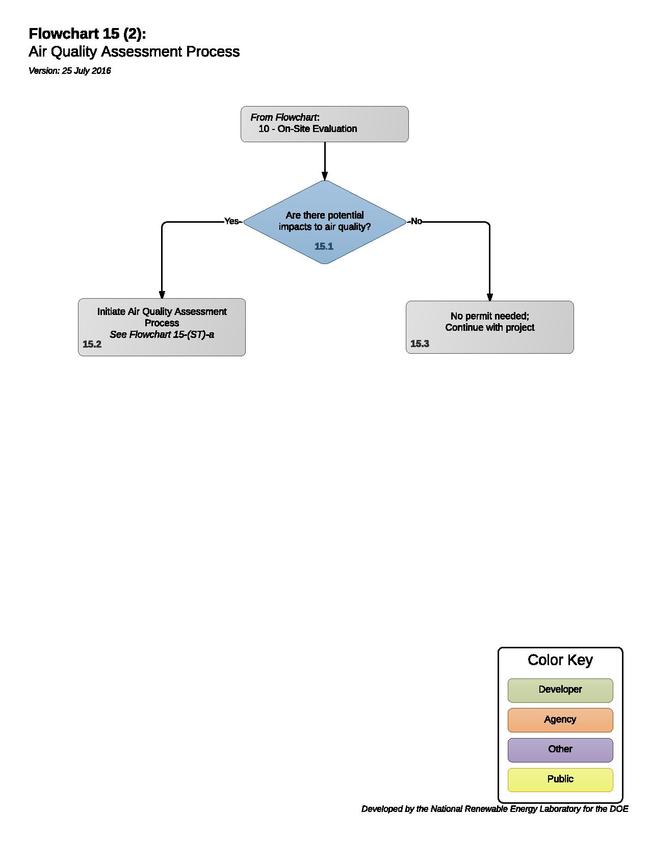 15.1 - Are There Potential Impacts to Air Quality?

If there are potential impacts to air quality, then the developer will be required to obtain a permit.

If the proposed project will impact air quality, then the developer must consult the applicable state air quality permitting process before continuing with the activity.

15.3 - No Permit Needed; Continue with Project

If the project will not impact air quality, then no CAA permit is required.

Retrieved from "https://openei.org/w/index.php?title=RAPID/Roadmap/15&oldid=962241"
Categories:
OpenEI is developed and maintained by the National Renewable Energy Laboratory with funding and support from the U.S. Department of Energy and a network of International Partners & Sponsors.