This flowchart illustrates the procedures required of developers in Nevada when dealing with biological considerations. The Nevada Department of Wildlife (NDOW) oversees implementation of state biological resources considerations in Nevada.

Nevada has a particular state notification and review process for wildlife considerations for all energy projects 10 megawatts or greater. The process is governed by NRS 701.600 et seq. Developers may also choose to establish a Habitat Conservation Plan for their project in order to facilitate cooperation with NDOW. If the project will disturb wildlife, then the developer may be required to obtain an Incidental Take Permit from NDOW. 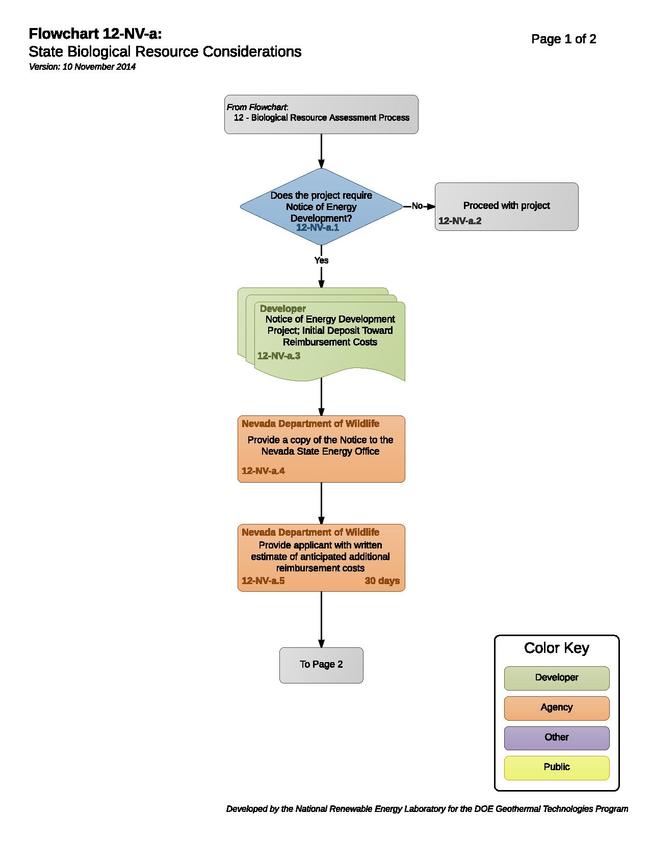 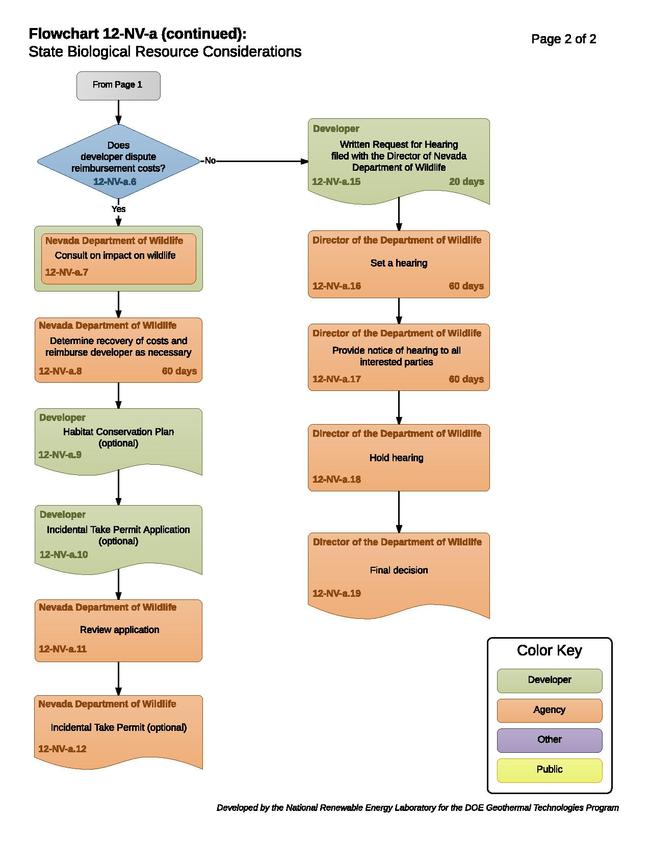 If the developer files an application with the federal government for a lease or easement for a right-of-way for an energy development project or an application with the Public Utilities Commission of Nevada or any county in Nevada relating to the construction of an energy development project must, concurrently with the filing of the application, file a Notice of Energy Development Project with and provide an initial fee to the Nevada Department of Wildlife (NDOW). NRS 701.610(1). If the project is under 10 MW, then the developer is not required to provide notice to NDOW.

The developer is required to provide NDW with notice of the development of an energy project (Nevada Department of Wildlife Application for Energy Projects "Fund for the Recovery of Costs") if the project will produce over 10MW. The notice must include the following:

NDOW is required to provide a copy of the Notice of Energy Development Project to the Nevada Office of Energy within 30 days after the notice is filed. NRS 701.610(3).

Nevada has a recoupment program to reimburse the Nevada Department of Wildlife (NDOW) for the cost of consultation. The developer pays a particular recoupment fee before consultation with NDOW begins. After the fee/deposit is paid, NDOW then consults with the developer and other state and federal agencies (as required) to determine the impact of the project on wildlife. Following consultation, NDOW prepares an accounting of their costs and reimburses the developer any balance due. NDOW is not permitted to seek reimbursement for costs incurred as a result of requests from the federal government or the Nevada Public Utilities Commission.

Cost recovery for energy projects is most common when the project requires environmental review under the National Environmental Policy Act (NEPA).

The regulations contain a detailed appeals process for developers to dispute the assessed costs. Final decisions by the Director of the Department of Wildlife may be appealed to state court.

12-NV-a.15 - Written Request for Hearing filed with the Director of Nevada Department of Wildlife

When a dispute arises with regards to the recovery costs requested by the NDOW, the developer may request a hearing with the Director of Nevada Department of Wildlife within 20 days after a decision from the NDOW.

The Director will conduct a hearing and accept evidence of additional costs.

The Director will make a final decision based on the evidence presented. The developer may appeal the decision to state court.

Retrieved from "https://openei.org/w/index.php?title=RAPID/Roadmap/12-NV-a&oldid=887336"
Categories:
OpenEI is developed and maintained by the National Renewable Energy Laboratory with funding and support from the U.S. Department of Energy and a network of International Partners & Sponsors.