Information current as of 2020
In the United States, any person (developer) may need a Letter of Authorization (LOA) from the Fish and Wildlife Service (FWS) if an action may result in an incidental take of a marine mammal for more than one year or serious injury or mortality of a marine mammal pursuant to the Marine Mammal Protection Act, 16 U.S.C. §§ 1361 - 1423 (MMPA). The MMPA prohibits the take (intentional or incidental) of marine mammals unless otherwise authorized by the FWS. 16 U.S.C. § 1371.

The MMPA authorizes the FWS to issue a Letter of Authorization (LOA) for a term of five years or less for incidental takes that may cause death or serious injury to marine mammals. 16 U.S.C. § 1371(a)(5)(A)(i); 50 C.F.R. § 18.27. The LOA must be in accordance with specific regulations, called Incidental Take Regulations (ITRs), that prescribe permissible methods of taking and other means of effecting the least practicable adverse impact on the affected species. The ITRs are issued as part of the permitting process and apply specifically to the proposed activity. They are promulgated in the Final Rule, which is issued in advance of the LOA. The LOA process takes between eight (8) and 18 months and involves two comment periods, possible public hearings, and consultations. The LOA may also be used for multiyear or complex projects, even when there is no potential for death or serious injury to marine mammals. 50 C.F.R. § 18.27. 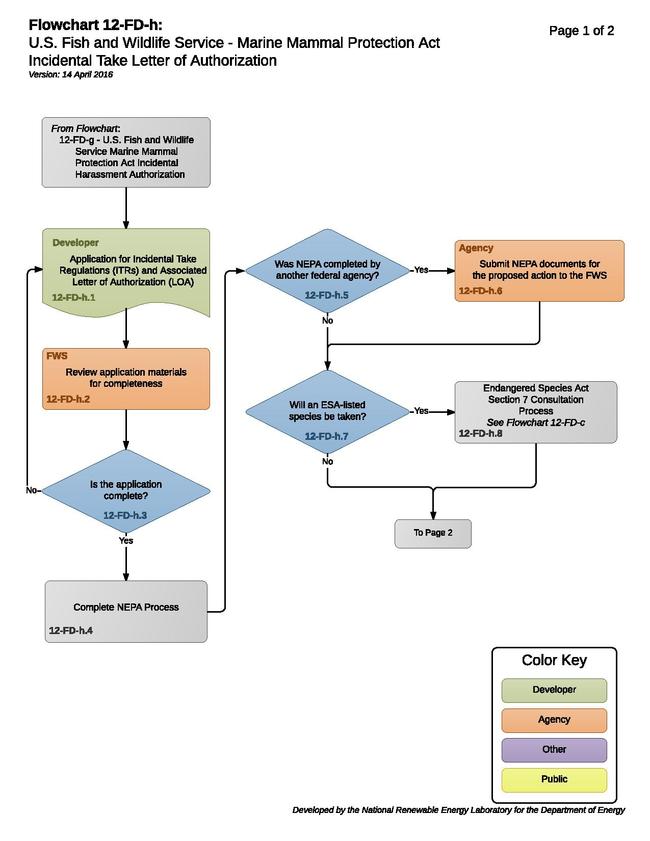 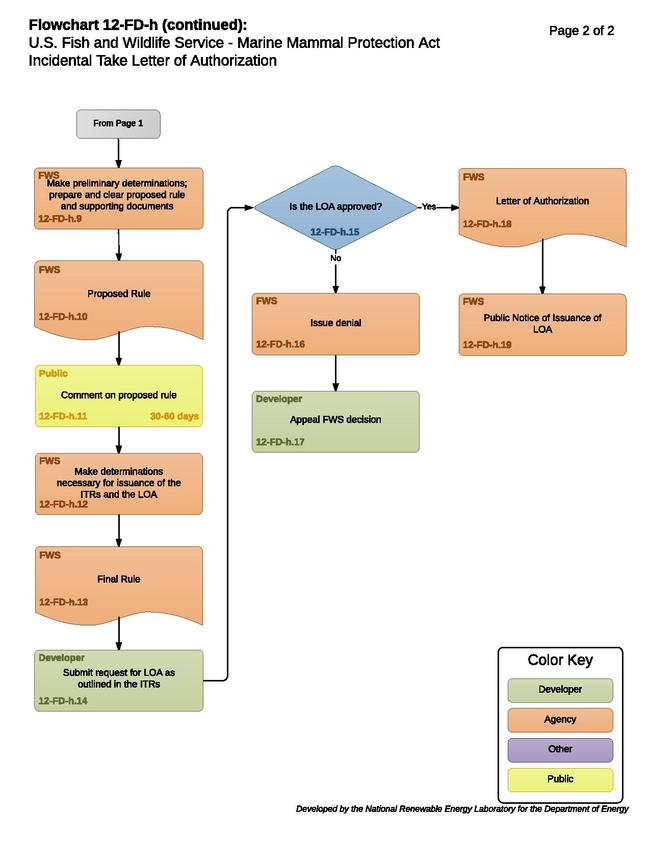 A developer must submit a written application for an LOA and ITRs to the FWS if an action has the potential to result in the incidental:

The LOA application must include the following information:

The National Environmental Policy Act (NEPA) requires federal agencies to consider the potential environmental consequences of their proposed actions and any reasonable alternatives before undertaking a major federal action. The issuance of a permit by a federal agency is considered a major federal action. Consequently, a NEPA analysis must be performed before an LOA can be issued. If the applicant is a federal agency, they will usually be required to perform their own NEPA analysis for the proposed activity. If a NEPA analysis has already been performed, it must be submitted to the FWS in order to determine its applicability to the LOA. If applicable, the FWS may adopt it.

12-FD-h.7 to 12-FD-h.8 – Will an ESA-Listed Species be Taken?; Initiate Section 7 Consultation with ESA Division

Takings of ESA-listed marine mammals must be authorized under both the ESA and MMPA. Consequently, the FWS and federal applicants must initiate a Section 7 consultation with the ESA division of the FWS when an ESA-listed species is involved. For more information on the ESA process, see ESA Section 7 Consultation Process:
12-(FD)-c.

After receiving the application, the FWS makes preliminary determinations regarding the proposed activity’s impact on the species and the availability of the species stock for subsistence uses. If the FWS determines that the proposed activity will have a “negligible impact” on the species and that it will not cause an “unmitigatable adverse impact” on the availability of the stock for subsistence uses, a Proposed Rule is drafted. The FWS must issue its findings and the Proposed Rule for comment and publish a Notice of Availability in the Federal Register. 50 C.F.R. § 18.27(d)(2).

After the close of the public comment period, the FWS must finalize the determinations necessary for the issuance of the ITRs and the LOA. The final determinations are based on:

The final determinations may require modification of the regulations or require additional mitigation measures. See 50 C.F.R. § 18.27(d)(3). The ITRs become effective 30 days after the Final Rule is published.

Once the final determinations have been made, the FWS publishes the Final Rule in the Federal Register, which includes applicable authority, a preamble, and responses to substantive comments. In addition, 50 C.F.R. § 18.27(e) requires the regulations to set forth:

50 C.F.R. § 18.27(f) requires the FWS to issue an LOA before the developer can conduct activities pursuant to the regulations established by the Final Rule. Procedures for submitting a request for an LOA are outlined in the ITRs. Once the request for the LOA is received, the FWS evaluates the request based on whether the level of taking is consistent with the findings made for the total taking allowable under the Final Rule.

If the level of taking requested by the developer is not consistent with the Final Rule and the regulations contained therein, the FWS will deny the LOA request. The developer may make a request for reconsideration and appeal a denial of that request in accordance with 50 C.F.R. § 13.29.

If the level of taking requested by the developer is consistent with the Final Rule and the regulations contained therein, the FWS will issue the LOA. The LOA must specify the period of validity and any additional terms and conditions appropriate for the specific request. 50 C.F.R. § 18.27(f)(4). Notice of issuance of all LOAs must be published in the Federal Register within 30 days of issuance. 50 C.F.R. § 18.27(f)(3).

Retrieved from "https://openei.org/w/index.php?title=RAPID/Roadmap/12-FD-h&oldid=993979"
Categories:
OpenEI is developed and maintained by the National Renewable Energy Laboratory with funding and support from the U.S. Department of Energy and a network of International Partners & Sponsors.