In Utah, a developer must consider the project's impact on state cultural and historic resources. 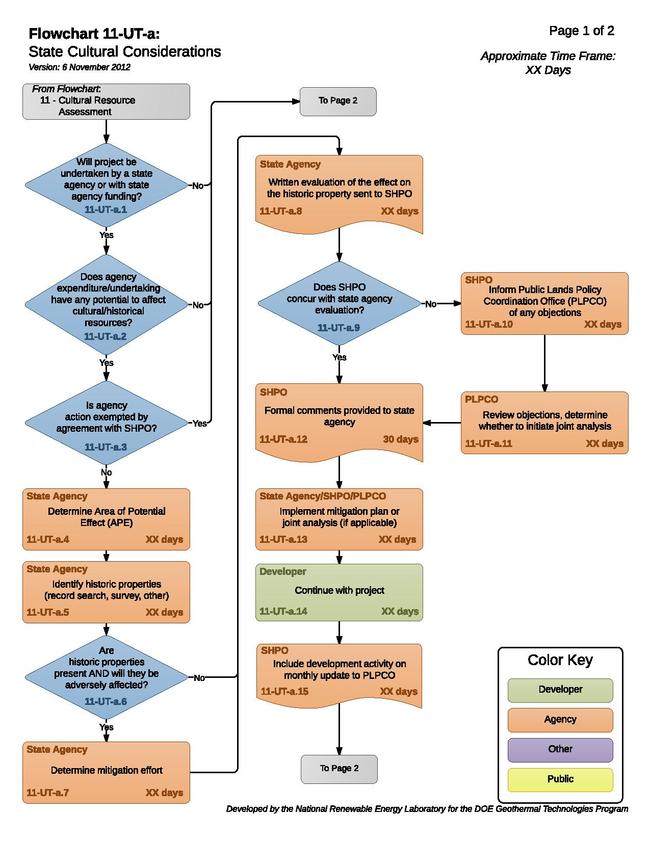 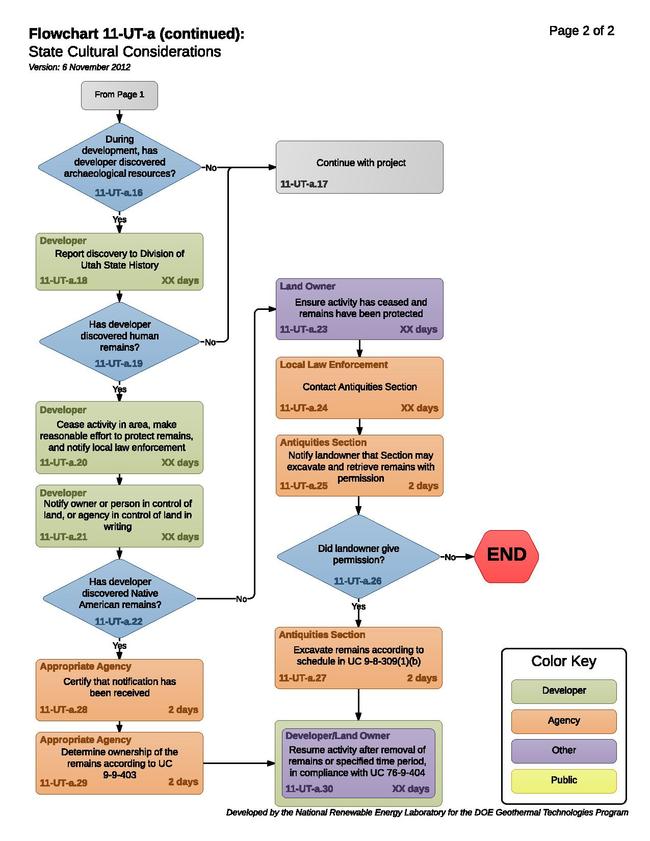 11-UT-a.1 - Will the Project Be Undertaken by a State Agency or With state Agency Funding?

Utah law requires state agencies and developers using state funds to take into account how their expenditures or undertakings will affect historic properties. They must also provide the State Historic Preservation Officer (SHPO) with a written evaluation of the project and an opportunity to comment.

11-UT-a.2 - Does the Agency Expenditure/Undertaking Have Any Potential to Affect Cultural/Historic Resources?

11-UT-a.3 - Is the Agency Action Exempted by Agreement with SHPO?

The state agency funding or undertaking the project does not have to submit a written evaluation to the SHPO if the project is exempted by agreement.

11-UT-a.6 - Are Historic Properties Present AND Will they Be Adversely Affected?

In order for further action to be required, historic properties must not only be present, but they must have the potential to be adversely affected by the project.

If historic properties are located and they will be adversely affected by the project, the state agency must come up with a plan to mitigate the impacts of the project on the cultural/historic resources.

11-UT-a.8 - Written Evaluation of the Effect on the Historic Property; Sent to SHPO

If cultural/historic resources will be adversely affected by the project, the state agency must send a written evaluation of the effect to the SHPO.

If the SHPO does not concur with the state agency's written evaluation, the SHPO must inform the PLPCO of any objections. (UC 9-8-404(2))

The PLPCO must review the SHPO's objections and determine whether or not to initiate a joint analysis. If the PLPCO determines further analysis is necessary, the PLPCO shall, jointly with the state agency and the SHPO, analyze:

The PLPCO, the state agency, and the SHPO shall also consider as part of the joint analysis:

The developer may continue after employing any measures suggested in the mitigation plan or joint analysis.

11-UT-a.15 - Include Development Activity on Monthly Update to PLPCO

Once per month, the SHPO shall provide the PLPCO with a list of undertakings on which a state agency has requested the advice or consultation of the SHPO or the Antiquities Section.

11-UT-a.16 - During Development, Has the Developer Discovered Archaeological Resources?

If no archaeological resources are discovered while engaging in construction or geothermal production, no permit is required and the developer may continue.

Report of Discovery on State or Private Lands

(1) Any person who discovers any archaeological resources on lands owned or controlled by the state or its subdivisions shall promptly report the discovery to the division.

(2) Any person who discovers any archaeological resources on privately owned lands shall promptly report the discovery to the division.

The discovery of human remains will require the developer to follow specific procedures.

(a) Cease activity in the area of discovery, and (b) Notify local law enforcement

If a developer knows or has reason to know that the developer has discovered human remains on non-federal, non-state land, the developer must notify local law enforcement and notify the person who owns or controls the land.

If a developer knows or has reason to know that the developer has discovered Native American remains on state lands, the developer must notify, in writing, the appropriate state agency having primary management authority over the lands.

If the human remains are recognized to be Native American remains, the developer must follow a different, specific procedure.

11-UT-a.23 - Ensure Activity has Ceased and Remains Have Been Protected

The person who owns or controls the land must require that activity in the area of the discovery cease until activity may be resumed in accordance with UC 9-8-309(1)(d).

The person who owns or controls the land must also make a reasonable effort to protect the human remains.

11-UT-a.25 - Notify Landowner that Section May Excavate and Retrieve Remains with Permission

Within two business days, the Antiquities Section must notify the landowner that the Section may excavate and retrieve the remains with the landowner's permission.

If the landowner gives permission, the Section must excavate the remains no later than five business days from the date of permission. However, under extraordinary circumstances, the director may designate a time period longer than five days but not to exceed 30 days.

11-UT-a.28 - Certify that Notification Has Been Received

The developer may resume activity in compliance with UC 76-9-404 only after the appropriate state agency has been notified and that agency has certified that notification has been received. (UC 9-9-403)

(2) Subject to Subsection 7 (of UC 9-9-403), Native American remains discovered on nonfederal lands that are not claimed under Subsection 1 shall be disposed of in accordance with rules made by the division:

(6)(a) Ownership of Native American remains shall be determined in accordance with this Subsection (6) if:

11-UT-a.30 - Resume Activity After Removal of Remains or Specified Time Period, In Compliance with UC 76-9-404

According to UC-9-8-309(d), the owner of private land may engage in activities in the discovery area without violating UC 76-9-404 if, after having been notified of the discovery, the owner consents to an Antiquities Section excavation and engages in activity only after the remains are removed or after the time frame described in UC 9-8-309(d)(1)(b)(ii)(B).

Retrieved from "https://openei.org/w/index.php?title=RAPID/Roadmap/11-UT-a&oldid=950509"
Categories:
OpenEI is developed and maintained by the National Renewable Energy Laboratory with funding and support from the U.S. Department of Energy and a network of International Partners & Sponsors.