The electrical grid in Idaho is part of the Western Interconnection power grid and the Western Electricity Coordinating Council (WECC). It includes the provinces of Alberta and British Columbia, the northern portion of Baja California, Mexico, and all or portions of the 14 Western states between. The WECC is the Regional Entity responsible for coordinating and promoting Bulk Electric System reliability in the Western Interconnection, including in Idaho. In addition, WECC provides an environment for coordinating the operating and planning activities of its members as set forth in the WECC Bylaws.

The Office of Energy Resources (OER) was created by Idaho Governor C. L. "Butch" Otter by executive order to help secure the state's energy outlook. Toward that goal, the OER leads Idaho's efforts to help facilitate the development of critical transmission projects as they emerge. The OER focuses on establishing a harmonized effort with the federal, tribal, and state agencies, departments, divisions, and local governments for the purpose of insuring that Idaho's energy needs are satisfied.

The State’s direct authority to site high-voltage transmission lines is limited to transmission lines located within a NIETC; however, no NIETCs currently exist within Idaho so the authority has not been put into practice. Siting authority belongs to local governments or federal agencies that manage the land where the proposed transmission line would be located. Public utilities that propose to build a major facility must obtain a CPCN from the IPUC. A public utility is defined as any electric corporation delivering service to the public Idaho Statutes Title 61 Chapter 1 §61-129 and major facilities of a public utility include any electrical facilities used for the transmission of electricity.Idaho Statutes Title 61 Chapter 1 §61-118

The typical process for siting and permitting high-voltage transmission lines is to obtain a CPCN from the IPUC, to carry out siting with local authorities who govern the land proposed for the development, and to obtain local land use permits prior to construction. State agencies may have siting authority if a proposal would be located on state managed lands.

The utility may use eminent domain to site transmission lines per Idaho Statute Title 7 Chapter 7 § 7-701.

The IPUC authority to site high-voltage transmission lines that are 115kV or greater is limited to proposals located within a federally-designated NIETC. There are no designated NIETCs in Idaho, and this permit process is not utilized at this time. NIETCs are designated geographic areas where transmission congestion or constraints adversely affect consumers. These corridors are designated under Section 206(a) of the Federal Power Act (created by section 1221(a) of the Energy Policy Act of 2005) which directs U.S. Department of Energy (DOE) to identify transmission congestion and constraint problems. If a proposal is located in a federally designated energy corridor of Section 368 of the Energy Policy Act of 2005, siting and environmental review authority would go to the federal land management agency that manages the area.

If the IPUC has siting authority, a Route Permit will be required instead of a CPCN. For Route Permits, the applicant does not have to demonstrate need because with the presence of NIETCs, the legislature finds that “the efficient and safe transmission of electricity is critical to the well-being of the citizens and the economy of this state, the region and the nation.” In the Route Permit process, local siting authority can be preempted.

Local Process
The typical siting process for a transmission line in Idaho will fall to the local units of government in the form of local siting permits, because NIETCs are lacking within Idaho. Title 67 Chapter 65 of Idaho Code extends authority to the counties to include transmission corridors in their comprehensive plans and provides ordinance authority and processes for granting such permits. When the siting process falls to the county level, utilities are required to work with local governments to determine siting.

Counties and municipalities have the authority to establish zones or zoning districts, and within these districts may establish specific standards for structures (including transmission lines). The process for zoning amendments is consistent across the state. As part of the zoning ordinance, local governments may require special use or conditional use permitting for transmission lines. Specific requirements will vary by local government.

Because the majority of land in Idaho is publicly managed, siting process negotiations often take place between the utility and state and federal land management agencies. 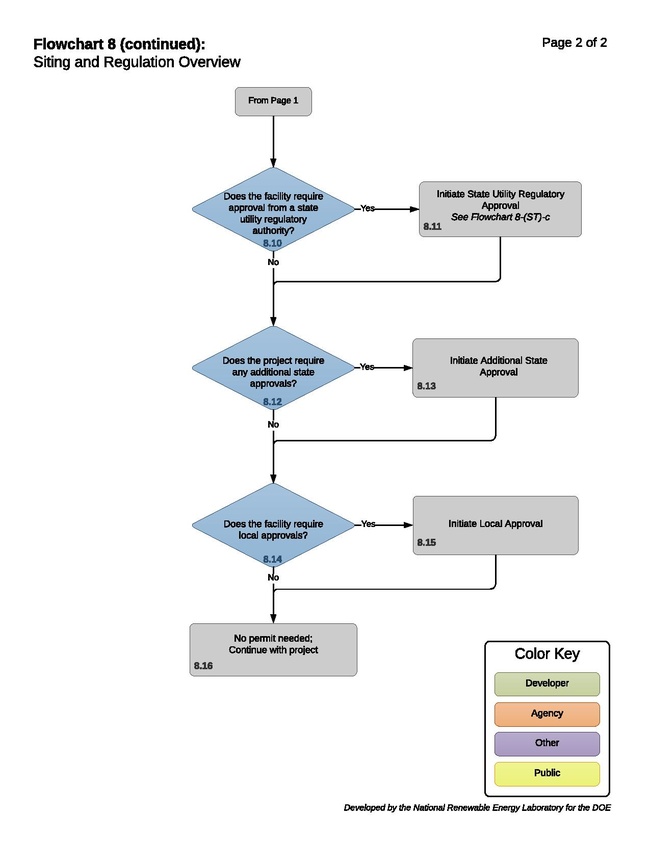 RAPID-Overview(Tech-Jurisdiction-Topic)
Retrieved from "https://openei.org/w/index.php?title=RAPID/BulkTransmission/Idaho/Transmission&oldid=957460"
Categories:
OpenEI is developed and maintained by the National Renewable Energy Laboratory with funding and support from the U.S. Department of Energy and a network of International Partners & Sponsors.