Developers must comply with Alaska’s Nonpoint Source Pollution control if their project will affect “impaired waters.” However, if the developer’s project will not affect impaired waters, then compliance is voluntary. Developers will work closely with the Alaska Department of Environmental Conservation (ADEC) to determine Total Maximum Daily Loads (TMDL) and Waterbody Recovery Plan Requirements.

Developers must comply with National Pollutant Discharge Elimination System (NPDES) requirements if their project will discharge pollutants into the waters of the United States. Alaska has been granted authority by the Environmental Protection Agency to administer the NPDES program within the state. The Alaska Department of Environmental Conservation (ADEC) has primary authority for issuing most new NPDES permits in Alaska. A NPDES permit in Alaska establishes conditions and limits for the discharge of pollutants from domestic and industrial sources. A general permit regulates discharges from more than one facility with similar wastewater characteristics in a defined geographical area. Developers must request to be covered under a general permit. If the developer cannot be covered by a general permit, then an individual permit is necessary. An individual permit is issued to a single facility and its terms, limits, and conditions are specifically tailored to the unique aspects of that facility and the receiving water body. Developers must submit an application for an individual permit, and ADEC will then post a draft discharge permit on their website based on the information contained in the application.

Developers must obtain a 401 Water Quality Certification from the Alaska Department of Environmental Conservation if the project implicates any federal license or permit issued to construct or operate a facility which may result in any fill or discharge into navigable waters of the United States. ADEC must ensure that the project will comply with the Clean Water Act, the Alaska Water Quality Standards (18 AAC 70), and other applicable state laws. Developers may qualify for coverage under a general permit, if coverage is not available for the project then an individual permit will be required. 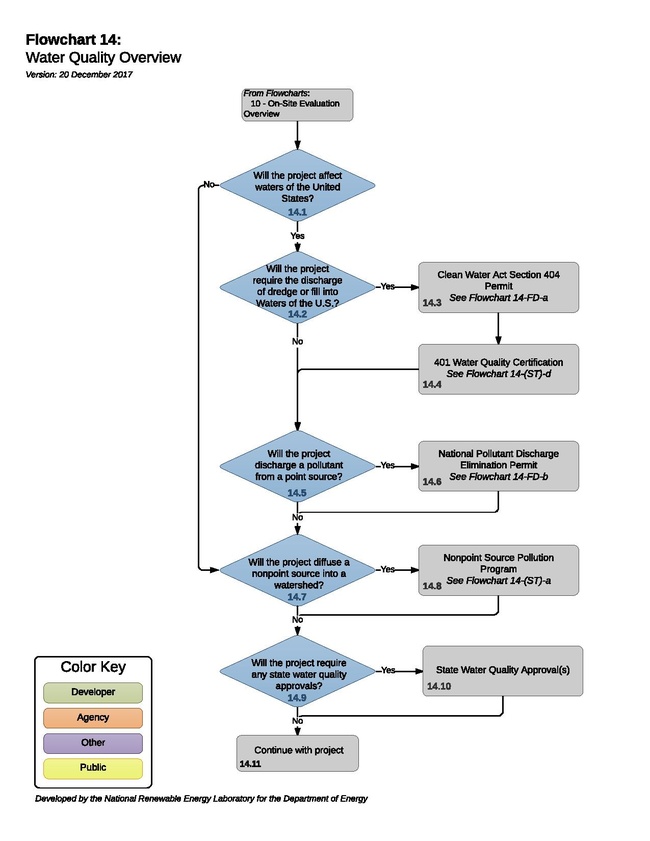 RAPID-Overview(Tech-Jurisdiction-Topic)
Retrieved from "https://openei.org/w/index.php?title=RAPID/BulkTransmission/Alaska/Water_Quality&oldid=951232"
Categories:
OpenEI is developed and maintained by the National Renewable Energy Laboratory with funding and support from the U.S. Department of Energy and a network of International Partners & Sponsors.