Waves are a result of the interaction between the wind (a result of temperature differentials created from the sun) and the water’s surface. The energy potential for waves is greatest between 30° and 60° latitude in both hemispheres on the west coast due to the global direction of the wind. Additionally, waves will increase in size when there is a greater distance for them to build up.

Most wave energy technologies can be classed into seven main archetypes: attenuators, point absorbers, pressure differentials, oscillating water columns, overtopping, oscillating wave surge converters, and terminators. Variability of these archetypes is driven by variability in the wave resources of different regions and distances from the shoreline.

Unlike some renewable energy technologies like wind energy, wave energy converters (WECs) have not converged to a common archetype and many variants exist. The following sections describe some of these variants.

Surface attenuators generally have multiple floating segments connected to one another and are oriented parallel with incoming waves. They use the rise and fall of swells to create a flexing motion that may be converted into rotation or drive hydraulic pumps to generate electricity. Some attenuator designs consist of a single long, flexible surface expression instead of multiple segments (references). 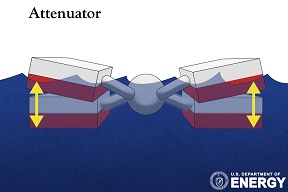 Point absorbers extract energy through the relative motion between a body that moves in response to wave forcing and fixed or immobile structures. The moving body may be on the surface or submerged, and the 'fixed' body may be the seabed or another structure less affected by wave action. Their principal dimension is small relative to the length of waves they are absorbing energy from. Electricity may be produced using a linear or rotary generator, or a fluid may be pumped using mechanical force and motion directly (references). 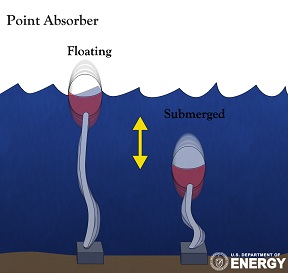 Oscillating water column devices use wave action to pressurize air in a chamber, forcing it through an air turbine. As water recedes from the chamber, the resulting vacuum pulls air back through the turbine and into the chamber. They can be located onshore or in deeper waters offshore. The turbine may be coupled to a rotary generator to produce electricity (references). 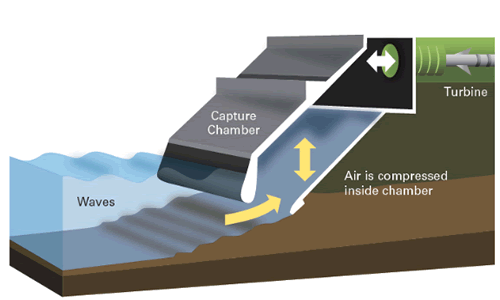 Overtopping devices are long structures that allow wave motion to fill a reservoir to a higher water level than the surrounding ocean. The difference in pressure between water in the reservoir and water at the surface forces fluid through a low-head turbine coupled to a generator, where electricity is produced similar to conventional hydropower. Devices can be either onshore or floating offshore (references). 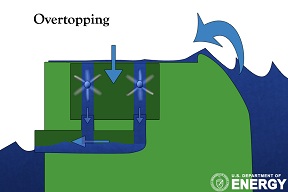 These devices typically have one end fixed to a structure or the seabed while the other end is free to move. Energy is collected from the relative motion of the body, driven by the horizontal motion of waves (surge), to the fixed point. Oscillating wave surge converters often come in the form of floats, flaps, or membranes. Rotary motion at a hinge may drive a generator to produce electricity, or the moving body may be used to pressurize a fluid (references). 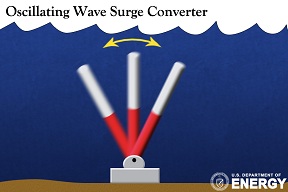 A terminator is a wave energy device that operates perpendicular to the wave direction. Terminators typically comprise both stationary and moving components, which capture or reflect the power of the wave. These devices are typically installed onshore or nearshore, though some floating devices have been developed for offshore applications. Oscillating water columns and overtopping devices are two common types of terminators, although more novel designs have also been developed (references). 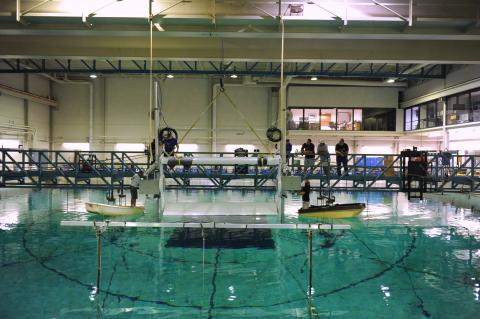 The gross wave energy resource is specified as the annual average power per meter of wave crest width, which can be approximated as power per meter of coastline. This is the gross power contained in the waves themselves, but the actual energy that could be turned into electricity would be substantially less due to efficiency limitations of the device, and conflicting use and environmental restrictions along the coastline.

Waves are relatively energy-dense and typical commercial sites considered for development at this early stage of the industry have an average annual wave energy flux of 30-35 kW/m. Such sites could power about 7-8 U.S. homes per meter of coastline. On the Pacific coast of the U.S., the resource can exceed 35 kW/m in many places (NREL 2017b). The figure below shows the global wave resource. 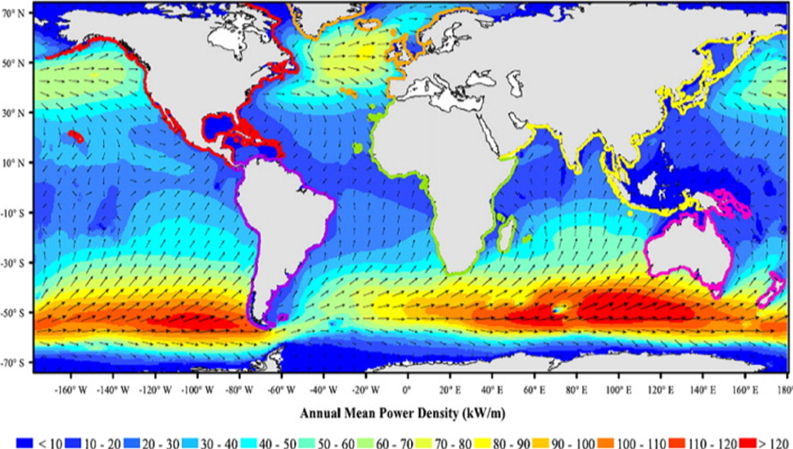 Ocean wave energy technology development began in the mid-1970s in response to the oil crisis, but wave technologies today are still pre-commercial with respect to their technical maturity. This slow start can be attributed to the harsh environment in which wave energy converters operate and the complex regulatory requirements imposed on device deployments. These limitations impact the speed of deployment and the rate of technology learning by the industry. In addition, only a few technology deployments have achieved sustained operation of one year or longer and demonstrated predictable energy production. As a result, the technology for wave energy remains at a relatively low state of technology readiness and, much like in the early days of wind, there has been limited convergence in device architectures.

While wave energy holds great promise in many coastal areas where incident wave resource is adequate, wave technologies are still at the prototype stage, and therefore costs are higher and difficult to compare with natural gas, solar and wind energy production costs. The cost of energy decreases with a higher wave energy resource potential. In some of the best resource areas (e.g. 30 kW/m), costs are estimated to be $0.70/kWh (Jenne et al. 2015), with some estimates exceeding $1.00/kWh (IEA-OES 2015; Neary et al. 2014). Research and development trends aim to significantly increase energy extraction efficiency and optimize mechanical designs through advanced controls, increased understanding of loads, and targeted innovations to increase energy production and reduce material costs. IEA OES estimates that the first commercial array of wave energy convertors may be installed between 2020 and 2030 at a cost of energy between $0.12 to 0.48/kWh (IEA-OES 2015).

The environmental effects of wave energy depends on the device type, location of deployment, and magnitude of energy extraction. The presence of wave energy converters may affect fish, marine mammals, and birds as they pose a minor collision risk or they may either attract organisms to the device or cause them to avoid the site. As with all electricity generation, there is some concern that electromagnetic fields generated by power cables and moving parts may affect animals that use Earth's natural magnetic field for orientation, navigation, and hunting. Large-scale changes in flow (from arrays) may disrupt natural physical systems to cause degradation in water quality or changes in sediment transport, potentially affecting ecosystem processes. Alternatively, devices absorbing wave energy may positively act as shoreline defense (references).

Retrieved from "https://openei.org/w/index.php?title=PRIMRE/MRE_Basics/Wave_Energy&oldid=1002015"
Category:
OpenEI is developed and maintained by the National Renewable Energy Laboratory with funding and support from the U.S. Department of Energy and a network of International Partners & Sponsors.