Salinity gradient technology is also known as "blue energy" or "osmotic power". The difference in salt concentration between freshwater and seawater creates a pressure differential, most often observed when a river flows into the sea. Seawater has higher osmotic pressure because of the salt, compared to the low pressure of freshwater. Two methods have been used to convert this pressure into energy, though more are in development. Reverse electrodialysis (RED) is essentially the creation of a salt battery, where ions are transported through membranes to generate power. Pressure retarded osmosis (PRO) involves pumping freshwater through a semipermeable membrane towards a pressurized chamber full of seawater. This increases the pressure, which spins a turbine to generate power.

Salinity gradient technologies using pressure retarded osmosis (PRO) convert the osmotic pressure of saline solutions to hydraulic pressure, which is then used to drive a turbine and generate electricity. Similar to reverse electrodialysis technologies, PRO technologies generate energy from the difference in salt concentration between salt water and freshwater (references). 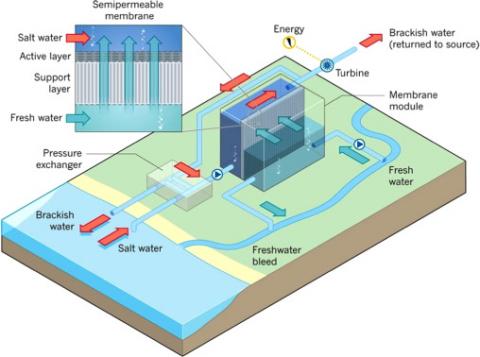 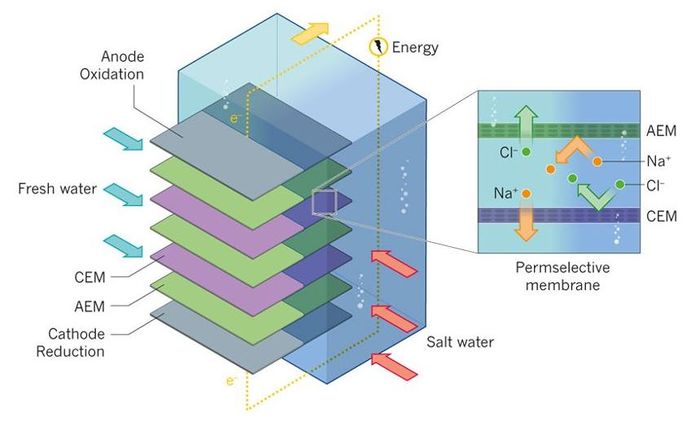 The global amount of salinity gradient energy available from oceans and seas is estimated at 3.1 TW (Stenzel, 2011; 2012). The theoretical or technical potential must be further revised to assess the actual potential of salinity gradient power generation. This requires an analysis on what constitutes ecological and legally responsible water extraction, composition of water (accounting for pollution and sediments) and the shape, and flows, of the water bodies (Stenzel, 2011; 2012). Inlets, outlets, and actual capacity are limited by environmental and seasonal conditions. As far as this report can ascertain, these analyses have been made or are in the process of being made in Canada, Colombia, Germany, the Netherlands and Norway. This study is planned to be enlarged under the Integrated Network for Energy from Salinity Gradient Power (INES) project. (Source: IRENA, 2014)

An important factor for both the performance and costs of PRO and RED are the membranes. Current net power density (which considers the membrane potential, resistance and the power required to pump the water) of membranes is maximum 2.7 W/m^2, but the latest laboratory experiments have achieved a net power density of 14.4 W/m^2 (for a PRO process). Higher power densities could be obtained by changing the cell design, in particular the membrane resistance, the cell length and the use of nanotubes. Changing cell designs could increase the calculated net power density close to W/m^2. The power density of membranes is, however, not the only indication of performance. Eventually, it is the design of the entire facility, including the circulation of large quantities of water within the plant, which determines the performance of the plant. (Source: IRENA, 2014)

With the exception of the cost estimates for existing projects (which reflect experimental set-ups), there is little hard evidence for the costs of both PRO and RED technologies. Based on feasibility studies, future costs for 2020 are estimated to be around USD 65-125 per Megawatt (/MW) for PRO, and USD 90/MW for RED. Levelised costs of electricity are estimated to be around USD 0.15-0.30 per kilowatt-hour (/kWh) for PRO, and USD 0.11-0.20/ kWh for RED in 2020. The lower ranges in cost are for hybrid applications that make use of existing infrastructure. The cost ranges are highly speculative, and are relatively positive compared to cost projections for other ocean energy technologies with a more advanced technological status. (Source: IRENA, 2014)

The primary environmental concerns associated with salinity gradient technologies typically encompass changes to water quality and impacts on the physical environment. The natural process of mixing freshwater and seawater flushes nutrient poor water and brings in nutrient and oxygen rich water, creating a unique brackish water habitat that leads to some of the most productive ecosystems. These areas are used by many organisms and are both biologically and physically diverse. Potential impacts could arise from speeding up the mixing process, altering the balance of freshwater and saltwater, or risks to organisms at intake or release points. These impacts could be reduced by releasing the resulting brackish water into the middle of the water column and using screens to cover the intake tubes. The main socio-economic concern with salinity gradient technology is diverting fresh water resources for power generation, which can be negated by avoiding water stressed or scare regions. Due to limited deployments and information on these technologies, there is much uncertainty about environmental impacts and more research is needed to fully understand potential impacts. (references).

Retrieved from "https://openei.org/w/index.php?title=PRIMRE/Glossary/Salinity_Gradient&oldid=1002014"
Category:
OpenEI is developed and maintained by the National Renewable Energy Laboratory with funding and support from the U.S. Department of Energy and a network of International Partners & Sponsors.