Ocean thermal energy conversion (OTEC) technology converts solar energy stored in the layers of the tropical and subtropical oceans. Thermal heat engines use the temperature difference between the sun-warmed surface water and cold water in the deep ocean. This technology requires large volumes of water to convert a small portion of the available energy, yielding about 2.5%–3.0% of stored solar energy as net power after pumping and other power requirements are met (Avery 1994). OTEC can potentially provide very substantial amounts of power, making it attractive as a carbon-neutral baseload source. Under funding from the U.S. Department of Energy (DOE), open-cycle OTEC was successfully demonstrated with positive net energy production (up to 103 kW from 255 kW gross) from 1993 to 1998 at the Natural Energy Laboratory of Hawaii Authority (NELHA) facility at Keahole Point on the island of Hawaii (SERI 1989).

Ocean thermal energy conversion (OTEC) systems use the temperature difference between flows of warm surface water and cold-deep water into electricity. OTEC systems were first envisioned in the 1880s with a proof of concept demonstration project built in Cuba in 1930. Presently, the 100 kW OTEC facility on Kume Island, Okinawa, Japan is the only operational OTEC facility in the world and is considered a sub-scale demonstration project. Commercial scale OTEC facilities require a capacity of approximately 100 MW to minimize plant cost according to industry scaling models (Ascari et al. 2012). There have been no commercial scale systems installed to date.

Many different OTEC archetypes have been investigated, some on floating offshore platforms and some built onshore with pipelines to transport the water to and from the ocean (Vega 2016; Meyer et al. 2011; William and Wu 1994). Each system uses one or a combination of thermodynamic processes to turn the temperature difference into mechanical energy.

The image to the right illustrates the closed-Rankine cycle (closed cycle OTEC) to visualize the process (Ascari et al. 2012). Warm water is pumped from near the surface and used to heat a working fluid, such as ammonia, which vaporizes at a low temperature. The vapor expands and drives a turbine as it passes from the hot to the cold side where it condenses, much like a steam turbine used in thermal power plants. Cold water is pumped from the deep ocean and is used to condense the working fluid. Both the warm and cold water supply must be sufficient to supply the large volumes needed by an OTEC plant. Based on the Lockheed 100 MW conceptual OTEC plant design, to produce approximately 1 GW (ten 100 MW plants), a combined flow rate of 8,260 m3/s is needed, or about half the flow of the Mississippi River at New Orleans (Ascari et al. 2012). 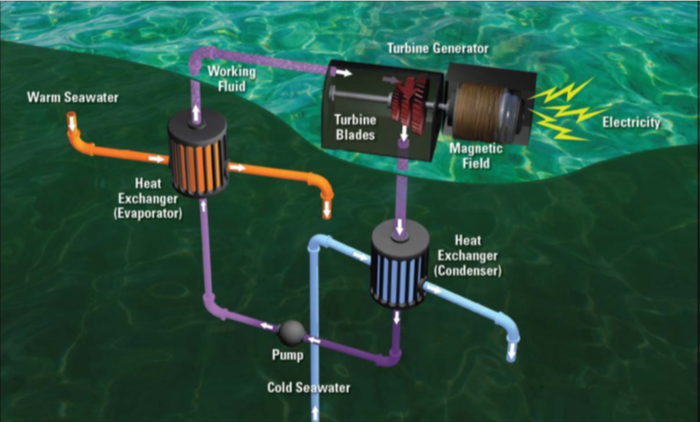 OTEC systems can be classified as closed cycle or open cycle systems as shown in the next image. The open-cycle system pumps warm sea water into a low pressure chamber where it vaporizes, expands through a turbine, and condenses on the cold side. In contrast, the closed cycle system pumps the warm sea water through a heat exchanger to warm the working fluid. Both the open-cycle and closed-cycle plants use cold water pumped from the deep ocean to condense the working fluid. An ancillary benefit is that the condensate is freshwater that can have other uses such as agriculture and potable drinking water.

OTEC resource quality depends primarily on water temperature differences in the water column, but also on the availability of both warm and cold sources, often determined by the rate of replenishment at the plant location via local ocean currents. Thermal differences that are higher than 18-deg. C are considered suitable for OTEC, with optimal differences of around 25-deg. C. OTEC plants require access to both a large volume of warm surface water that is at least 22-deg. C and a cold deep water source (Ascari et al. 2012; William and Wu 1994).

Recent OTEC cost studies have been performed for floating plants and all studies have concluded that the cost of power is strongly driven by plant size (Vega 2012; Ascari et al. 2012). The studies have converged to a 100 MW plant size with an estimated LCOE of between $0.14 and 0.20/kWh. For smaller plants, approximately10 MW size, LCOE is estimated to be between $0.35 and 0.45/kWh (Vega, 2012). These studies assume the OTEC plant is relatively close to shore (0 km), and that the transmission export cable accounts for approximately 10% of the total capital costs. No cost studies have been performed for land based OTEC plants within the last 25 years. However, earlier studies indicate that for a very near shore cold water source, the LCOE would be $0.98/kWh for a 10 MW plant when adjusted for inflation (Vega 1992). A side product of some OTEC cycles is the production of fresh water which can be used to augment revenue streams.

The primary environmental concerns associated with OTEC technologies typically encompass changes in water quality. A major environmental concern arises as cool, nutrient rich water is withdrawn from the deep ocean and discharged higher in the water column. The effects of this cooler water and transport of nutrients on ecosystem processes could vary but may affect nearby habitats through temperature changes or increased biological growth. Screens will cover the intake tubes, but there is still a chance that marine organisms could be fatally entrapped. In order to maintain the efficiency of the heat exchangers, the warm water will need to be treated with chlorine, which will cause changes to water quality. (references).

Retrieved from "https://openei.org/w/index.php?title=PRIMRE/MRE_Basics/Ocean_Thermal_Energy_Conversion&oldid=1002013"
Category:
OpenEI is developed and maintained by the National Renewable Energy Laboratory with funding and support from the U.S. Department of Energy and a network of International Partners & Sponsors.