Current energy can be captured from tidal channels, ocean currents, or rivers. Ocean current energy technologies capture the energy from the relatively constant flow of ocean currents, which are driven by several factors, including wind, bathymetry, and the rotation of the Earth, as well as water temperature, density, and salinity. Tidal energy technologies capture the energy from flow induced by the rise and fall of tides, which is driven by gravitational influence of the moon and sun on the earth’s oceans. Land or subsea constrictions, such as straits and inlets, can create high velocity currents at specific sites, making them suitable for electricity generation. Riverine energy technologies extract the kinetic energy from flowing water in rivers to generate electricity. Although not technically a marine resource, as part of the natural hydrological cycle, precipitation from drainage basins, groundwater springs, and snow melt feed rivers that flow towards lakes, seas, and oceans.

Modern current power generating turbines operate on the same principles as wind turbines. As the moving water passes the current turbine’s blades, the current’s kinetic energy is converted into mechanical energy as the rotating blades spin a drive shaft. The mechanical energy in the drive shaft is then converted to electrical energy using a generator, often through a gearbox. There have been many pre-commercial tidal turbine deployments in North America, Europe and Asia, but these have been limited to single units or small arrays. Some examples include Verdant Power’s East River installation in New York City and Atlantis Resources installation in Pentland Firth, Scotland (Rooney et al. 2013; MeyGen 2017).

The following two technologies represent the primary archetypes have been developed that have direct analogues in wind energy. Further technologies listed are novel to hydrokinetic energy.

These turbines are the most similar to traditional wind turbines, where the kinetic energy of moving water is captured by spinning blades facing the direction of flow. Turbines can be open or ducted (shrouded) and placed anywhere in the water column, though bottom-mounted is the most common. Turbines may use active or passive measures to yaw or vane in the direction of flow. They can have pitching blades allowing them to change their hydrodynamic performance based on flow conditions. As for wind turbines, a number of different electrical generation options may be selected for electricity production, from permanent magnet machines to induction generators directly tied to the grid (references). 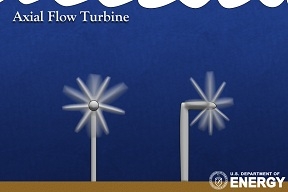 These turbines capture kinetic energy of moving water with spinning blades oriented perpendicular to the direction of flow. They can be mounted in either vertical or horizontal orientations. When mounted vertically, these devices can operate regardless of the direction of flow. They typically have cylindrical cross-sections amenable to placement in confined channels or allowing tight array spacing. Turbines can be open or ducted (shrouded) and placed anywhere in the water column, though bottom-mounted is the most common. The electricity production mechanism is similar to axial-flow turbines (references). 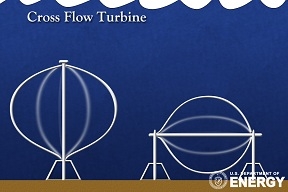 Oscillating devices do not have rotating blades, but instead have one or more hydrofoils that translate perpendicular to the flow direction by lift or drag. They may be oriented horizontally or vertically, though like axial-flow turbines, must face the direction of flow for maximum energy extraction. Linear motion of the foils may be converted to rotary motion for electricity generation, or linear generators may be used (references). 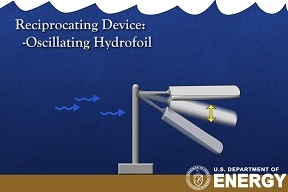 A tidal kite is comprised of a hydrodynamic wing, with a turbine attached, tethered by a cable to a fixed point that leverages flow to lift the wing. As the kite 'flies' loops through the water, the speed increases around the turbine, allowing more energy extraction for slower currents. The kite is neutrally buoyant so as not to fall as the tide changes direction. Electricity production is by means of a generator coupled to the turbine. Power is transferred through a cable coupled to or as part of the tether (references). 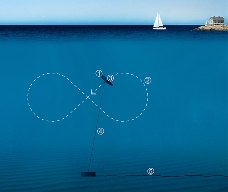 Historically designed to efficiently transfer water up a tube, an Archimedes screw is a helical surface surrounding a ventral cylindrical shaft. Energy is generated as water flow moves up the spiral and rotates the device. The slow rotation implies coupling to a generator through a gearbox (references). 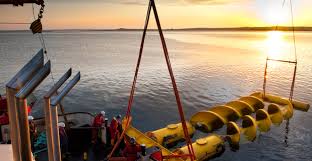 Gravity from the moon and sun cause water in the ocean to bulge in a cyclical pattern as the Earth rotates, causing water to rise and fall relative to the land in what are known as tides. Land constrictions such as straits or inlets can create high velocities at specific sites, which can be captured with the use of devices such as turbines. Since seawater is about 800 times denser than air, tidal turbines can collect energy with slower water currents and smaller turbines than wind energy. While tidal currents are very predictable, challenges arise due to the need for devices to collect energy from flow that changes direction and survive the harsh corrosive marine environment. Power may also be produced by extracting potential energy from the rise and fall of the tides in a manner similar to conventional hydropower. 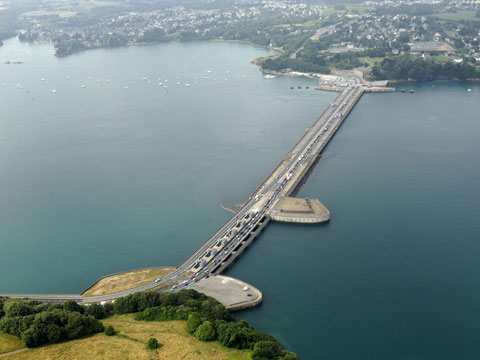 Strong ocean currents are generated from a combination of temperature, wind, salinity, bathymetry, and the rotation of the earth. The sun acts as the primary driving force, causing winds and temperature differences. Because ocean currents are fairly constant in both speed and flow and carry large amounts of energy, the ocean may provide a variety of suitable locations for deploying energy extraction devices such as turbines. Turbines capable of harnessing the kinetic energy of ocean currents may be indistinct from other marine current turbines and function according to the same principles. However, they may be designed or optimized for lower flow speeds relative to currents in tidal channels and may not need to account for reversing flow. A major difference is where the devices may be located – both geographically and in the water column. Strong ocean currents tend to be further offshore than tidal currents, which tend to be found in coastal or inland waters. This leads to deployment in deeper water, where a fixed substructure supporting a turbine higher in the water column where current is stronger is impractical.

Riverine energy technologies extract the kinetic energy from flowing water in rivers to generate electricity. Although not technically a marine resource, as part of the natural hydrological cycle, precipitation from drainage basins, groundwater springs, and snow melt feed rivers that flow towards lakes, seas, and oceans. This movement of water downstream can be used to generate electricity via turbines or oscillating hydrofoils.

Tidal energy technologies remain at the pre-commercial prototype level but are somewhat more advanced than wave technologies. In the U.K., the first commercial scale project is under development in the Pentland Firth, with 269 turbines and a total installed capacity of 398 MW. The first Pentland Firth turbine is expected to be deployed in 2020 (MeyGen 2011; Power Technology 2017). Deployments of pre-commercial systems in the U.S. have been limited to tidal flows in the East River in New York, and Cobscook Bay, Maine. Much like the first wind turbines, tidal technologies need to overcome failures in early designs to increase turbine lifespan. With experience, better design tools and validation, more robust designs can be developed that increase turbine reliability. Accessibility is also an issue in tidal flows as slack tides are short and offer limited windows for installation and access to the turbines.

The cost of tidal turbines is driven by many factors including the size of the machines, the number of machines, and the availability of quality resource. Early estimates indicate that a 10 MW array could have an LCOE of approximately $0.22/kWh and a 100 MW array could have an LCOE of around $0.15/kWh. However, these costs can only be achieved with sufficient industry experience. It is estimated that over 1,000 MW of installed tidal power is needed to gain this experience, which is likely more than a decade away (IEA-OES 2015; Neary et al. 2014).

The environmental effects of current energy depends on the device type, location of deployment, and magnitude of energy extraction. The main environmental concern is collision between turbine blades and marine organisms due to natural animal movements, attraction to the device, or inability to avoid the turbines within strong currents. There is also concern that noise from turbines can affect animals that use sound for communication, social interaction, orientation, predation, and evasion. As with all electricity generation, there is a slight concern that electromagnetic fields generated by power cables and moving parts of the turbines may affect animals that use Earth's natural magnetic field for orientation, navigation, and hunting. Likewise, chemicals such as anti-corrosion paint and small amounts of oil and grease may enter the waterbody during spills, though some turbine designs do not require lubrication, and affect water quality. Large-scale tidal changes in flow (from arrays) may disrupt natural physical systems to cause degradation in water quality or changes in sediment transport, potentially affecting ecosystem processes (references).

Retrieved from "https://openei.org/w/index.php?title=PRIMRE/Glossary/Current_Energy&oldid=1002010"
Category:
OpenEI is developed and maintained by the National Renewable Energy Laboratory with funding and support from the U.S. Department of Energy and a network of International Partners & Sponsors.