How can I be a part of InSPIRE?

Construction activities at most large-scale, ground-mounted installations of photovoltaic (PV) arrays are preceded by land clearing and re-grading to standardized slope and surface conditions to facilitate construction access, racking installation, and facility operations and maintenance (O&M). The impact to existing vegetation may be total eradication followed by installation of a gravel cover and subsequent application of herbicides. NREL cost modeling estimates that grading practices can account for 3-6% of total installed capital costs of utility-scale solar projects, and all conventional site preparation practices are expected to account for 20% of total utility-scale PV installed costs by 2020 (DOE, 2012). 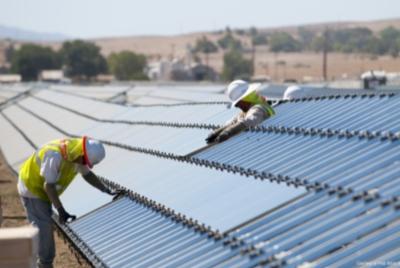 Mass grading can strip fertile soils from the site, preventing current and future agricultural use of the land. Grading on greenfield sites may also remove native vegetation and damage habitat for native flora and fauna. Mass grading can also disturb land and provide a pathway for weeds and other invasive species to grow. Application of herbicides to prevent weeds on graveled sites over the life of a solar installation can prevent any future use of the land for agricultural production and potentially contaminate nearby waterways and wetlands.

Grading requirements differ depending on whether a PV system is tracking or fixed. Single-axis tracking systems are increasingly common among large-scale PV installations, accounting for nearly 80% of the utility-scale PV capacity installed in 2017. Single-axis tracking systems, however, can only accommodate slopes of approximately 3-6%. Within this range, the slope must be consistent across the rows, which can be 300’ in length. Longer and variable pile lengths may be used to maintain a consistent array slope with more variable topography underneath the arrays; however, this incurs higher costs for the additional racking material.

New techniques and racking systems can reduce the grading needs and accommodate up to 15% slopes, but sites must still have a consistent slope to accommodate most tracking systems. The added costs of techniques to accommodate existing topography may be offset by reduced costs of weed control, erosion, and dust mitigation over the life of the project. Reduced grading maintains the surface layer of the soil intact and can prevent intrusion of weeds or other invasive species into the project site.

Fixed PV systems can accommodate significantly more variation in the topography. If a site is slightly rolling over a large area, variable racking post lengths may be able to eliminate the need for significant grading. However, if the variation in the topography occurs over a smaller area, more grading will be required to accommodate tracking systems and to establish suitable and safe terrain for workers and equipment for fixed systems.

Reduced grading can preserve natural vegetation where it exists, minimize weeds and erosion that can result after vegetation removal, and potentially expedite permitting. Selecting sites where minimal grading is needed, such as marginal or no longer productive tilled agricultural land, can help minimize the costs and impacts from grading.

While reduced grading can save civil engineering and construction costs, it may also lead to higher costs for racking as post lengths may increase to ensure sufficiently uniform PV array heights. Complicated racking systems needed to accommodate uneven topography and avoid mass grading can in turn increase construction time and labor costs.

In feedback gathered by NREL from 38 large-scale solar industry members with knowledge of the site development process, the most common method cited to reduce site preparation costs was minimizing grading and accommodating existing topography. Industry research found significant variation in the costs of site preparation, supporting the idea that this is an opportunity for significant cost savings. Land preparation practices in Goodrich, James, and Woodhouse (2012), including ground levelling, sediment control, hydrology, road construction, and vegetation clearing, cost between $5,000-65,000 per acre.

The grading that does need to occur for equipment pads, access roads, and tracking systems can stockpile topsoil for future use. Stockpiling more productive soils with higher organic material content allows these soils to be set aside and then spread over the graded surface to support re-establishment of a vegetative ground cover.

Retrieved from "https://openei.org/w/index.php?title=InSPIRE/low_impact/habitat/site_preparation&oldid=968374"
Category:
OpenEI is developed and maintained by the National Renewable Energy Laboratory with funding and support from the U.S. Department of Energy and a network of International Partners & Sponsors.