Hydrogen is not an energy source but an energy carrier. It extracts its energy from water. Hydrogen has been known as the "perfect" fuel because it's is the most abundant of any element on Earth. It is a pollution free alternative to batteries. Its a chemical reaction between hydrogen and oxygen to produce electricity.In the fuel cell, electrochemical devices transform the chemical energy of they hydrogen and oxygen into electricity generating water as a by-product. "Hydrogen (H2) is being aggressively explored as a fuel for passenger vehicles. It can be used in fuel cells to power electric motors or burned in internal combustion engines (ICEs)." In 2003 the Bush Administration released a program called the Hydrogen Fuel Initiative. The U.S's goal is to research and develop reasonably priced hydrogen fueled cars by 2020. 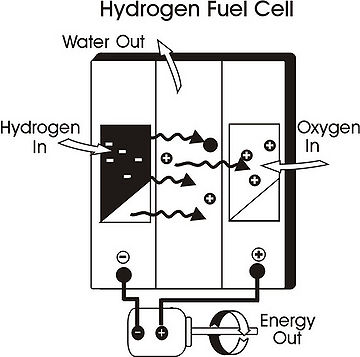 Retrieved from "https://openei.org/w/index.php?title=Hydrogen_fuel&oldid=297137"
OpenEI is developed and maintained by the National Renewable Energy Laboratory with funding and support from the U.S. Department of Energy and a network of International Partners & Sponsors.