A Perspective on Health and Natural Gas Operations: A Report for Denton City Council

The Politics of 'Fracking': Regulating Natural Gas Drilling Practices in Colorado and Texas

Modern Shale Gas Development in the United States: A Primer

Hydraulic Fracturing:
The process used in the Oil and Gas industry of drilling deep into the ground and injecting water, sand, and other chemicals, in order to fracture rock and allow gas, petroleum, and coal seam gas to flow up the well and be harnessed for energy.
Other definitions:Wikipedia Reegle 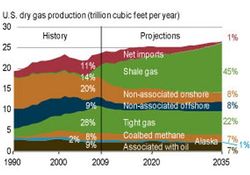 Hydraulic fractures form naturally in rock layers, caused by the presence of high-pressure fluids that cause the rocks to fracture. The oil and gas industry has taken this natural occurrence one step further by creating their own hydraulic fractures in order to get to petroleum, natural gas, or coal seam gas buried deep under ground.

In this procedure, water, along with sand and fracking chemicals (a mixture of chemicals that helps break down rock faster than water) are injected deep into the ground in order to facilitate the flow of gas towards the surface of the well.

Two types of wells are drilled: horizontal and vertical. Vertical wells are most common, and have been drilled for many years, while horizontal wells are a much more recent advance in drilling. They are drilled parallel to the rock layer targeted for extraction. From the well, the fracking fluid is injected into numerous bores that flow toward the well. The overall technique allows oil and gas companies to reach depths of 5,000 to 20,000 feet. At that depth, the fracking of rock is vital to enable natural gas and oil to flow from the rock to the well borehole.

The Marcellus Shale, stretching along the Appalachian basin and across several eastern states, is perhaps the epicenter of fracking in the United States. The number of marcellus wells in Pennsylvania alone has gone from 196 wells in 2008, to 1592 projected wells for 2011. The rush to cash in on the energy source has been mired in criticism due to several reports and numerous accounts of drilling activities contaminating drinking water.[1]

Natural gas is very important to the United States in order to meet the nation's energy demands. Natural gas, coal and oil supply about 85% of the nation’s energy, with natural gas supplying about 22% of the total. The percent contribution of natural gas to the U.S. energy supply is expected to remain fairly constant for the next 20 years.[2] Natural gas is important to the commercial, industrial, and electricity generation sectors, and plays a role in residential heating.[2]

The debate over the safety of fracking is important, but the fact remains that natural gas will remain a vitally important resource if the United States is to meet its energy demands in the coming years. Furthermore, access to domestic natural gas resources can offer the country a secure source of energy, as opposed to the continued heavy reliance on foreign oil imports.

Beyond the federal laws, several states have their own versions of the federal NEPA law, requiring environmental assessments and reviews at the state level and extending those reviews beyond federal lands to state and private lands. This gives the states broad powers to regulate, permit, and enforce all shale gas development activities, including the drilling and fracture of the well, production operations, management and disposal of wastes, and abandonment and plugging of the well. These are in place to allow states to address more site-specific characteristics of their wells.[2] 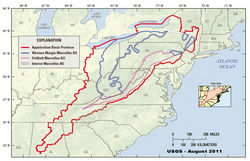 The EPA recently announced a fracking study plan set to take place over the next several years. "The agency announced last year that it will study the natural gas extraction technique, which involves injecting a mixture of water, sand and chemicals into the ground to break up underground rock formations and release trapped gas. The aim of the study is to determine whether the process, also called "fracking," affects drinking water supplies." [3]

Three of the 7 locations that will be tested are in Pennsylvania. A preliminary report is expected next year, with the full report available by 2014. Its clear this will be a contentious issue as long as environmental concerns abound, and as long as the energy payoff is so high. Energy companies will be lining up to drill for oil and gas. The next couple years will determine whether the activity can be completed safely and successfully, or if the technique is too dangerous to our drinking water.

Retrieved from "https://openei.org/w/index.php?title=Hydraulic_Fracturing&oldid=961413"
Category:
OpenEI is developed and maintained by the National Renewable Energy Laboratory with funding and support from the U.S. Department of Energy and a network of International Partners & Sponsors.