Common models used for quantitative pathways analysis are usually divided among bottom-up, top-down and hybrid models which combine elements of each. 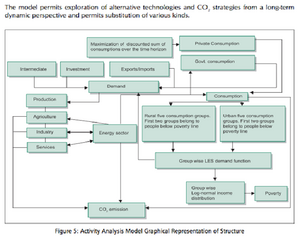 The following literature provides useful background on the similarities and differences as well applications of pathways analysis models.

EnergyPLAN
The Advanced Energy System Analysis Computer Model, or EnergyPLAN, is a free model developed at the Aalborg University's Department of Development and Planning in Denmark. The model runs on Windows computers and optimizes national or regional energy systems. It is a deterministic model based on simulations in hourly time steps that helps answer questions about the impact of renewable energy targets and other energy regulations on a country or region's energy supply.

Integrated Global System Modeling Framework
This comprehensive tool developed by the MIT Joint Program on Science and Policy of Global Change analyzes interactions among humans and the climate system. It is used to study causes of global climate change and potential social and environmental consequences.

International Institute for Applied Systems Analysis (IIASA) Models
The International Institute for Applied Systems Analysis is an independent institution that conducts climate change, energy security, and sustainable development research. In the energy sector, the institute has developed several analytical tools for its research, which are described on the website and in publications available for download. The institute also provides access to greenhouse gas databases.

Long-range Energy Alternatives Planning System (LEAP)
LEAP is a Windows application for medium- to long-term energy planning and greenhouse gas mitigation assessment developed by the Stockholm Environment Institute (SEI). It is used by government agencies, academics, non-governmental organizations, consulting companies, and energy utilities for integrated resource planning and greenhouse gas mitigation assessments from city-scale analyses to analyses on a national, regional, and global scale. The model can track energy consumption, production and resource extraction in all sectors of an economy, and can account for greenhouse gas emission sources and sinks in both the energy and non-energy sectors.

Model for Analysis of Energy Demand (MAED-2)
"MAED evaluates future energy demands based on medium to long term scenarios of socioeconomic, technological, and demographic development. Energy demand is disaggregated into a large number of end-use categories corresponding to different goods and services. The influences of social, economic, and technological driving factors from a given scenario are estimated. These are combined for an overall picture of future energy demand growth." - Source: http://www.iaea.org/Publications/Factsheets/English/capacity.pdf

The following table provides a list of common tools used for pathways analysis in developing countries. You can use the information on data requirements, outputs and example products to help choose a pathways analysis model or method for your country. The next tab also includes information on available training materials and international support services for use of the tools.

Data requirements are an important consideration in choosing the model or method to be used for pathways or energy system analysis. Some models and methods are much more data intensive than others.

Other models are much more data intensive such as hybrids that combine top-down and bottom-up models requiring both engineering and input-output data for the economy.

The following data sources provide a starting point for understanding which models or methods might be most appropriate for your country. In the “Choosing a method/model” tab, these data are matched to models to help with the model choice process.

Energy flow charts developed by Lawrence Livermore National Laboratory show the relative size of primary energy resources and end uses in the United States, with fuels compared on a common energy unit basis. Similar energy flow charts can be developed for other countries to feed into energy system modeling activities.

Ecofys country fact sheets updated in December 2009 provide information on greenhouse gas emissions, energy use, sectoral trends, emission reduction costs and climate policies for 61 countries as well as for the world, Annex I and non Annex I countries.

Ecofys is working to develop templates to assist developing countries in planning sectoral emission baselines under a post-Kyoto climate regime.

This NREL webpage presents a graph published in May 2009 indicating the recent cost estimates and capacity factors for renewable and other energy technologies.

These data indicates the range of recent cost estimates for renewable energy and other technologies.

Below is a listing of training and other resources to support the use of common pathways analysis models presented in the previous tab.

Below you can search all pathways analysis training materials included in the Energy System and Scenario Analysis Toolkit.

A marginal abatement cost curve (MAC) illustrates the marginal cost of achieving a stated reduction of carbon emissions relative to a business-as-usual (BAU) emission level for a given year in the future. MAC curves can be very popular with policy makers because they clearly illustrate carbon mitigation economics. A policy maker can decide on a level of carbon mitigation and see the carbon price required to achieve that level of mitigation. Vice Versa, the policy maker can choose an “acceptable” price and see the expected level of mitigation. However, there are disadvantages to the MAC curve concept. First, it may lack transparency with respect to how the BAU emissions level was calculated, the technology or mitigation assumptions, and the calculated mitigation costs and potential. Second, the MAC curve represents an abatement cost for a given year, but does not detail the required investments and their costs in preceding years that would be required to achieve the level of mitigation desired. Third, there is generally limited representation of uncertainty in market conditions (i.e. GDP growth, fuel costs, etc.) and in future technology characteristics. Finally, the costs do not give consideration to ancillary benefits of carbon mitigation such as improved air quality or increased energy security.

Expert-based MAC curves rely on expert judgment on the likely BAU future energy system development and the corresponding cost to reduce those emissions through different energy technologies, fuel switching, efficiency improvements, etc. The measures are lined up according to cost and the lowest cost measures are considered first when the expert decides the potential market share that the technology can gain and, thus, how much mitigation potential it can achieve. The expert-based MAC curve provides a lot of information in a single chart and may be the “ultimate” PowerPoint slide. This approach gained significant attention from the detailed country level studies done by McKinsey & Company in 2010. EPA has developed expert-derived MAC curves for non-CO2 gases.

The advantages of the expert-based approach is that it includes a significant level of detail for individual technologies and mitigation measures. However, this approach is based on a technical cost and potential and does not incorporate the behavioral aspect of consumer and commercial decision making. Many expert-based MAC curves show negative cost mitigation potential (i.e. the measure saves money). In most cases, these are the result of market imperfections in which those who make decisions about mitigation technologies do not directly benefit from them (i.e. the landlord pays to replace a furnace but the tenant pays the utility bills) or where the measure has a considerable upfront investment that takes many years of energy bill savings to pay for it. In other cases the consumer may not consider future energy costs when purchasing an appliance such as a television.

Strengths and Weaknesses of MAC Curves Based on Expert Judgment

Model-derived MAC curves are generated by using an energy/economic model to generate a BAU emissions path. Then the model will be run several different times with different carbon price assumptions. The results of the carbon price emission paths are then compared to the BAU path and the differences are translated into a MAC curve. However, unlike an expert-based MAC curve, the carbon mitigation cannot be assigned to individual technologies or measures since, at each carbon price, a range of mitigation measures are typically being made. Depending on the level of technology detail in the model used, the changes in technology investment over time and different carbon prices can be broken out.

Energy/economic models are the tools that analysts use to project the potential impact of policy on energy consumption and environmental emissions. They can be categorized into top-down and bottom-up models. In general, top-down models, which model the entire economy, are good at capturing the impact of changes in the broader economy (i.e. macroeconomic feedback and change in GDP) but have less technical detail in the energy system. Conversely, bottom-up models tend to focus primarily on the energy system and have a very detailed representation of energy technologies. However, bottom up-models tend to have little, if any, detail on the rest of the economy.

This discussion is a summary of Fabian Keisicki’s paper “Marginal Abatement Cost Curves for Policy Making – Expert-Based vs. Model-Derived Curves”. The full paper can be found at: http://www.homepages.ucl.ac.uk/~ucft347/Kesicki_MACC.pdf

In response to a request from the Government of India’s Planning Commission, the Indo-US Low Carbon Modeling Workshop was held in late September 2011. This workshop provided a forum for an exchange on modeling frameworks for low emissions growth, a team of US government and national laboratory staff experts with their Indian counterparts. Links to the presentations made by the U.S. team of experts are below.

Retrieved from "https://openei.org/w/index.php?title=Energy_System_and_Scenario_Analysis_Toolkit&oldid=945499"
Category:
OpenEI is developed and maintained by the National Renewable Energy Laboratory with funding and support from the U.S. Department of Energy and a network of International Partners & Sponsors.