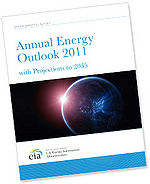 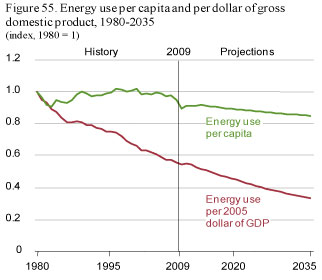 Growth in energy use is linked to population growth through increases in housing, commercial floorspace, transportation, and goods and services. These changes affect not only the level of energy use, but also the mix of fuels used. Energy consumption per capita declined from 337 million Btu in 2007 to 308 million Btu in 2009, the lowest level since 1967. In the AEO2011 Reference case, energy use per capita increases slightly through 2013, as the economy recovers from the 2008-2009 economic downturn. After 2013, energy use per capita declines by 0.3 percent per year on average, to 293 million Btu in 2035, as higher efficiency standards for vehicles and appliances take effect (Figure 55).[1]

Retrieved from "https://openei.org/w/index.php?title=Energy_Demand&oldid=961598"
OpenEI is developed and maintained by the National Renewable Energy Laboratory with funding and support from the U.S. Department of Energy and a network of International Partners & Sponsors.