During the stimulations of EGS Collab Experiment 1 at the Sanford Underground Research Facility (SURF) on the 4850 level, multiple rounds of downhole camera surveys were performed. Surveys of the production well E1-I were performed once on 25 May 2018 and once on 21 December 2018. On May 25th, the first round was done during fluid injection at the 164-ft stimulation zone in the injection well (E1-I). On December 21st, the second round was carried out during fluid injection at the 142-ft stimulation zone. Image quality was better in the May survey than in the December survey.

Prior to the injections, downhole instrumentation was removed from the production well (E1-P) to allow room for the downhole camera system. Water within E1-P was then lifted out by the application of air pressure and the downhole camera system was conveyed into the production well. Finally, the water was injected into the target interval E1-I through a straddled packer and the camera was used to scan for jetting points, or fluid entry, in E1-P.

Related files and some preliminary analysis have been submitted to GDR (https://gdr.openei.org/submissions/1227). There is a survey description in this package that further describes the procedure of the survey and the overall results. Additionally, there is a detailed analysis of the surveys in the form of a set of PowerPoint slides, which include animations/visualizations from the camera footage, presents interpretations in detail, and provides some general conclusions. Three GIF animations, along with the two video segments that show the jetting into E1-P, are also provided.

A detailed analysis of the jetting pattern and jetting locations, in the form of a set of PowerPoint slides, has been included in the GDR submission and is also included a manuscript that is being reviewed. 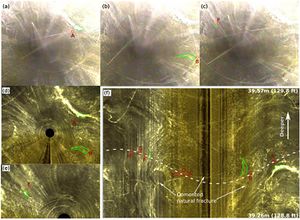 A method developed by Pengcheng Fu (fu4@llnl.gov) to accurately locate the jets. (a) to (c) are three frames in the downhole camera video. (d) and (e) are simulated downhole camera image from well E1-P’s televiewer log. (f) is unwrapped televiewer log covering the concerned segments. Three jets, A, B, and F, are located in this illustration. Enclosed by green polygons are the wellbore features used to anchor the jet locations. The white dashed curve in (f) is the trace of the fitted plane through the eight jets. The anchoring of other jet locations was performed in a similar fashion.

Retrieved from "https://openei.org/w/index.php?title=EGS_Collab_Experiment_1_Downhole_Cam_Surveys&oldid=998734"
OpenEI is developed and maintained by the National Renewable Energy Laboratory with funding and support from the U.S. Department of Energy and a network of International Partners & Sponsors.