Desalination involves removing the salt from water to make it drinkable. There are several ways to do it, and it is not a new idea at all. Sailors have been using solar evaporation to separate salt from sea water for at least several thousand years. Most of the world’s 1,500 or so desalination plants use distillation as the process, and there are also flash evaporation and electrodialysis methods.

All these methods are very expensive, so historically desalination has only been used where other alternatives are also very expensive, such as desert cities. However, an exploding world demand for potable water has led to a lot of research and development in this field and a new, cheaper process has been developed that involves heating sea water and forcing it through membranes to remove the salt from the water. The process is even cheaper if the desalination plant can be located next to an electrical power plant that is already heating sea water to use for cooling the electrical generating units. Even so, it is still more expensive than other alternatives, but it is indeed becoming more competitive and could become a viable alternative. 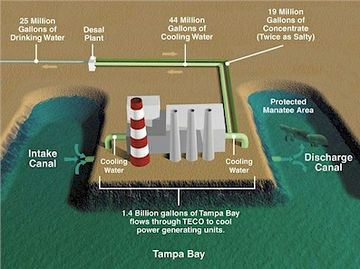 Retrieved from "https://openei.org/w/index.php?title=Desalinisation_plants&oldid=297195"
OpenEI is developed and maintained by the National Renewable Energy Laboratory with funding and support from the U.S. Department of Energy and a network of International Partners & Sponsors.