All power plants release a certain amount of heat during electricity generation. This heat can be used to serve thermal loads, such as building heating and hot water requirements. The simultaneous production of electrical (or mechanical) and useful thermal power from a single source is referred to as a combined heat and power (CHP) process, or cogeneration.

CHP plants are typically located at or near the load they serve because it is not practical to run expensive steam piping for long distances. This ensures greater reliability, potential for better power quality, reduced emissions, increased energy security for the end user, and more stability for the grid. In addition, there is the potential for increased fuel efficiency, less complicated transmission requirements, reduced transmission losses, market participation, and black-start functionality. In the case of a CHP system, there is a marked increase in overall process efficiency. Producing electricity and heat separately can have a combined efficiency of 40%-50%, while a CHP process can have an efficiency of 70%-80%.

CHP can be configured either as a topping or bottoming cycle[1]. In a topping cycle, fuel is combusted in a prime mover, such as a gas-fired or reciprocating engine, generating electricity or mechanical power. Energy normally lost in the prime mover’s exhaust system is recovered to serve the site’s thermal load in the form of hot water or space heating/cooling, as shown in Figure 1. In a bottoming cycle, fuel is combusted to provide thermal input to a boiler or other industrial furnace, and some of the heat rejected from the process is then used for power production, as shown in Figure 2. 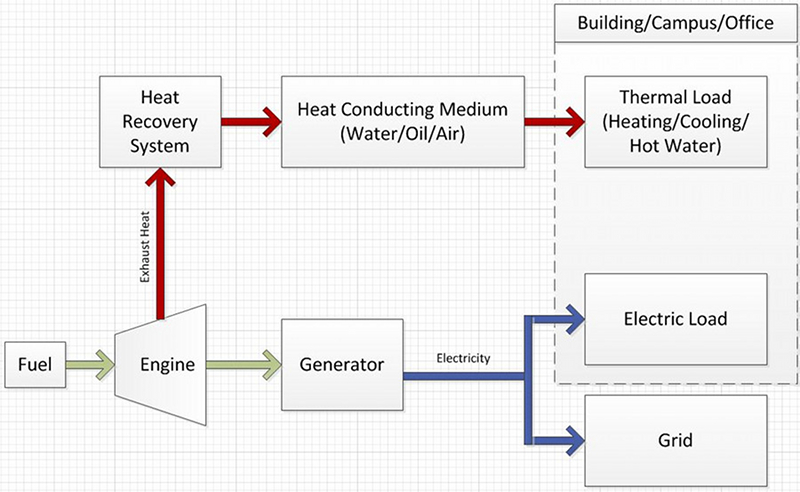 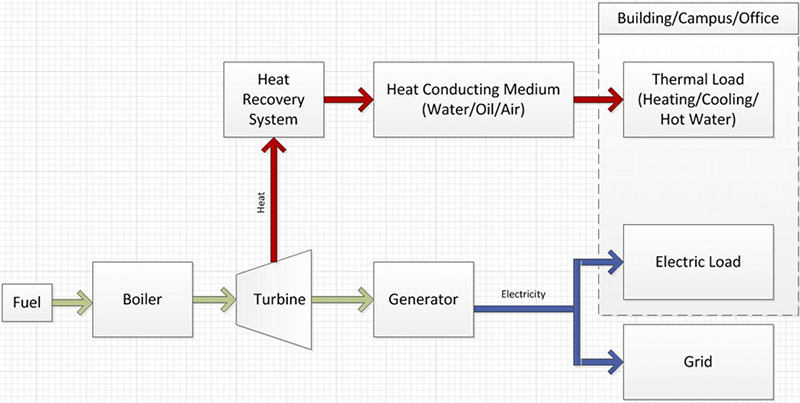 Common primary fuel sources for CHP systems are natural gas, diesel, biomass, and coal. Of these sources, natural gas has emerged as the preferred source over the past two decades. Decreasing price trends, abundant domestic supply, environmental benefits, favorable estimates for availability in the future, and favorable government policies are the primary reasons for the emergence of natural gas in the U.S. Also, the large-scale extraction of shale gas, especially Marcellus Shale, has helped improve the long-term outlook for natural gas resources. The amount of shale gas production has increased more than 10 times since 2005, as shown in Figure 3. 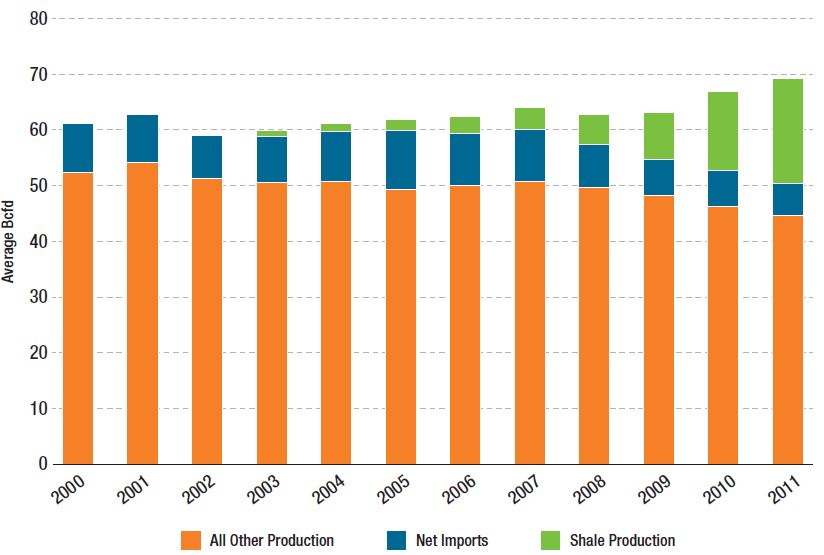 Despite the increasing production rate of natural gas, various projections have shown that its price will be stable around the $4-$7 per MMBtu in the U.S. for a thirty-year outlook. This could be due to uncertainties associated with resource projections and increasing demand. Projections made by the National Institute for Standards and Technology (NIST) show that the price of natural gas will experience some fluctuations between five-year intervals but remain stable on a thirty-year outlook, as shown in Figure 4.

Figure 4: Escalation Rates for Natural Gas and Electricity in the Western U.S. (13 States)"

Also shown are escalation rates for electricity during the same period. These rates cover the states of Alaska, Arizona, California, Colorado, Hawaii, Idaho, Montana, Nevada, New Mexico, Oregon, Utah, Washington, and Wyoming. These projections do not account for inflation, which was projected at 0.5% for the U.S.[2].

Another type of fuel used in CHP systems is biomass. Common biomass fuels include wood waste, municipal solid waste, and a variety of plant-based materials. When burned, biomass produces steam that can be used to drive a turbine to generate electricity or used directly to serve the thermal load of a site. In some cases, biomass resources are used to produce liquid transportation fuels, such as ethanol and biodiesel. Ethanol is largely used as a fuel additive and motor fuel in some countries. The majority of the ethanol is produced from corn; however, due to its augmented usage, several new technologies are being developed to make ethanol from sugarcane and other agricultural resources.

Biomass resources in the U.S. are divided into two major categories—rural and urban. Under these categories, the following feedstocks are most common:

Forest residues are defined as the material remaining after forests have been harvested for timber. Formerly, these residues were burned or left to decay until applications for energy production were developed. Crop residues are leftover after crops, such as wheat, hay, cotton, rice, and oats, are harvested. Residues are commonly in the form of crop stalks, corn stover, and wheat straw. Energy crops are certain grasses and trees grown primarily as feedstock for fuels in energy production. Certain hybrid poplars, willow, and switchgrass have been identified by the Oak Ridge National Lab (ORNL) as having the greatest potential for energy production. Manure biogas is produced when animal waste is allowed to decompose without oxygen (anaerobic digestion). The waste is decomposed without oxygen to reduce odor and allow for easier separation of solid and liquid waste. Biogas produced from regional wastes is typically environmentally friendly and CO2 neutral. Landfill gas is generated during the decomposition of organic waste at landfills and disposal facilities. Such waste typically is decomposed in anaerobic conditions. Landfill gas is considered the most common and abundant form of all biomass resources in the United States[3].

Urban wood waste is recovered from construction and demolition waste, old furniture, and other commercial and residential wood waste. Landfill gas is generated during the decomposition of organic waste at landfills and disposal facilities. Such waste typically is decomposed in anaerobic conditions. Landfill gas is considered the most common, and abundant, form of all biomass resources in the United States [3]. Wastewater treatment biogas is produced during the anaerobic decomposition of industrial/commercial/residential wastewater. Food processing waste consists of a variety of unused food particles, and processing by-products, such as rice hulls, fruit pits, nut shells, and meat processing waste.

Some important considerations when selecting a biomass fuel source are its availability, energy content, and cost. Table 2 provides information about each of the categories of fuel listed in Table 1.

Consumers typically consider other factors, such as moisture content, yield, seasonal availability of a fuel type, issues affecting availability and cost, quality, and proximity of resource to usage site, when determining the feasibility of a CHP project.

A CHP system typically consists of a prime mover, generator, heat recovery system, and electrical interconnections. The system is generally identified by its prime mover. Common prime movers include steam turbines, gas turbines, microturbines, and reciprocating engines. Each of these is briefly discussed below.

A steam turbine converts the energy in steam into mechanical power that in turn can be used to produce electric power. As shown in Figure 2, a steam turbine can be utilized in a bottoming cycle CHP system. Waste heat energy is transferred from the boiler to the turbine through steam, which powers the generator to generate electricity. This separation of functions enables steam turbines to operate with an enormous variety of fuels, from natural gas, biomass fuels, and coal.

Gas turbine power generation involves the use of the Brayton cycle and consists of an air compressor, a combustor chamber, a gas turbine, and a generator[3]. The turbine section extracts mechanical energy from the hot combustion products. Most of this energy is used to drive an electric generator or other mechanical load. The compressor and all of the turbine blades can be on one or two shafts: one for the compressor and a second for the turbine stages that produce useful output. A turbine’s efficiency is a function of its inlet temperature and pressure ratio, with higher levels of both factors leading to higher efficiency. CHP-based operations involve a gas turbine with a heat exchanger that recovers the heat from the turbine exhaust and converts it to useful thermal energy[3].

A microturbine is a small gas turbine with typical output in the range of 25-500 kilowatts (kW)[5]. Microturbines can be used in power-only generation or in CHP systems. Microturbines can operate using a variety of fuels, including natural gas, biogas [landfill gas (LFG), manure biogas], gasoline, kerosene, and diesel. Microturbines generally have lower electrical efficiencies than similarly sized reciprocating engine generators and larger gas turbines. However, because of their simple design and relatively few moving parts, microturbines generally incur lower maintenance costs compared to reciprocating engines. Typical microturbines have an internal heat recovery heat exchanger called a recuperator. The inlet air is compressed in a compressor and then preheated in the recuperator using heat from the turbine exhaust. Heated air from the recuperator is mixed with fuel in the combustor and ignited. The hot combustion gas is then expanded in one or more turbine sections, producing rotating mechanical power to drive the compressor and the electric generator[3]. In a CHP operation, a second heat exchanger can be used to convert the exhaust energy from the microturbine into useful thermal energy.

There are two types of reciprocating internal combustion engines—compression ignition (CI) and spark ignition (SI). CI engines operate on diesel fuel, or they can be configured to operate in a dual-fuel configuration that burns primarily natural gas or biogas with a small amount of diesel pilot fuel. SI engines use natural gas as the preferred fuel, although they can be configured to run on propane, gasoline, or biogas[3]. Commercially available reciprocating engines can range from 0.5 kW to upward of 5 MW. Reciprocating engines can be used in a variety of applications because of their small size, low capital cost, easy startup, proven reliability, good load-following characteristics, and heat recovery potential[6].

MU’s CHP based power plant provides all the thermal energy, and most of the electric energy for the campus. Steam and electricity for the campus are produced simultaneously at the plant resulting in an overall efficiency nearly twice that of a conventional power plant. Electricity is produced as a byproduct of the thermal (steam) energy used on campus. Steam is produced in the plant's boilers and heat recovery steam generators. The plant uses a variety of fuels including coal, natural gas, chipped tires, fuel oil and biomass to make steam. The power plant has four steam turbine generators ranging in size from 6 MW to 19 MW, and two gas turbine generators rated at 13 MW which are capable of meeting the entire campus’ electricity demand. [ Link ]

The Princeton power plant provides electricity, steam, and chilled water to the Princeton University campus. The plant consists of steam boilers, water chillers, an electric generator, and a large thermal energy storage system. The plant boilers and water chillers have capacities of 300,000 pounds of steam per hour and 20,000 tons of cooling capacity, and 40,000 ton-hours of storage capacity, respectively. The electric generator is powered by a gas turbine, and can combust natural gas or diesel fuel. Wasted exhaust heat from the turbine is recovered to heat water and make steam. The combined efficiency of Princeton’s plant is about 80%. The cogeneration plant can generate 15 megawatts of electricity, which is about equal to Princeton’s average daily electricity need. Princeton imports energy in the form of electricity, natural gas, diesel, and bio-diesel fuel. [ Link ]

The University of Iowa (UI) power plant uses oat hull, and oat hull residues as biomass fuel in its circulating fluidized bed (CFB) boiler as a new green energy source. The project saves hundreds of thousands of dollars in fuel costs annually. The oat hulls are obtained from Quaker Oats Company, located approximately 20 miles from the UI. The successful effort by the university-industry partnership captured the attention of peer institutions across the country, garnered various awards, and is applauded by sustainability advocates. [ Link ]

Prime mover
A prime mover is a machine that can convert energy from thermal, electrical or in pressure form to mechanical form and/or vice versa.

Generator
A generator is a machine that can convert energy from mechanical form to electrical form.

Heat exchanger
A heat exchanger is a device that can transfer heat from one medium to another.

Retrieved from "https://openei.org/w/index.php?title=Combined_Heat_and_Power&oldid=590164"
OpenEI is developed and maintained by the National Renewable Energy Laboratory with funding and support from the U.S. Department of Energy and a network of International Partners & Sponsors.