Predicting the thermal performance of enhanced geothermal systems (EGS) requires a comprehensive characterization of the underlying fracture flow patterns from practically available data such as tracer testing data. However, due to the inherent complexities of subsurface fractures and the generally insufficient geological/geophysical data, interpreting tracer data for fracture flow characterization and thermal prediction remains a challenging task. We tackle the challenge by leveraging a data assimilation method to maximize the utilization of information inherently contained in tracer data, and meanwhile maintain the flexibility to handle various uncertainties. More details can be found in the following manuscript: 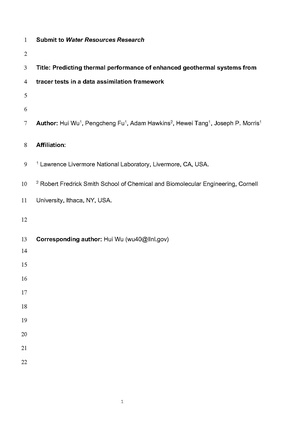 We propose a tracer data interpretation framework to first invert for fracture aperture distribution through ensemble smoother with multiple data assimilation (ES-MDA), and then predict thermal performance based on the inversion results. The following three components are integrated to achieve effective fracture characterization and accurate performance prediction:

Application to a field-scale EGS example

We use a field-scale EGS model to illustrate the proposed method (Fig. 2). Three vertical wells are connected to a horizontal fracture with highly heterogenous aperture following a multimodal distribution (non-Gaussian). We intentionally use such an irregular aperture distribution to examine the robustness and effectiveness of the proposed method. We first generate synthetic tracer data by injecting conservative/sorptive tracers into the fracture through well 1 and monitoring tracer breakthrough curves (TBCs, dots in Fig. 3) at wells 2 and 3.

Fig. 2 A field-scale EGS model to demonstrate the proposed method for aperture and flow field inference. Left: a 3D view of a square area of a fracture and its relationship with three wells. Right: Aperture distribution. 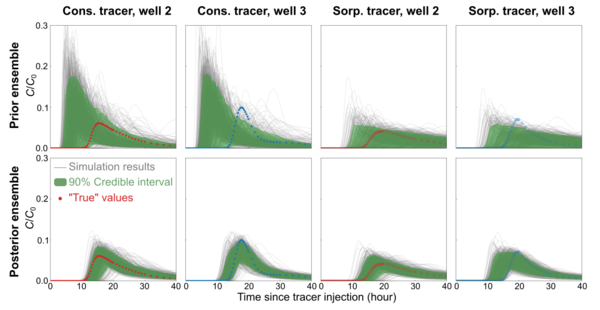 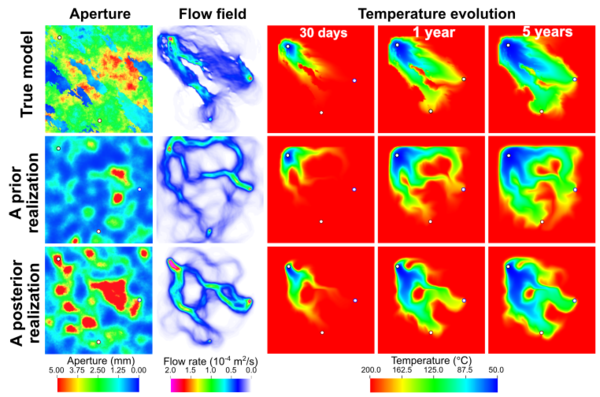 Fig. 5 Prediction of production temperature (flow rate averaged) from prior and posterior ensembles. The solid black line is the true thermal breakthrough curve. The olive (left) and red (right) lines are results for 50 selected realizations from the prior and posterior ensembles, respectively.
Retrieved from "https://openei.org/w/index.php?title=A_Data_assimilation_framework_for_EGS_thermal_perdiction&oldid=1015350"
OpenEI is developed and maintained by the National Renewable Energy Laboratory with funding and support from the U.S. Department of Energy and a network of International Partners & Sponsors.