Specific steps and goals forming the project plan depend highly on the final selection of the project site. A generic project plan was put together with the specific intent of sharing with the group of interested collaborators in the March 2018 meeting in Boulder, CO. Given the early stage of the project, definite measurement plans have yet to fully crystalize. However, even at this stage, it is clear from the science goals agreed on by the large group that multiple forms of observations will be required, over a wide range of atmospheric conditions. For example, the community has converged around goals including wake interaction, impingement on downstream turbines, mixing and merging, etc. Observing these phenomena will require remote sensing approaches at the highest resolution possible in both space and time. Additionally, it is broadly understood that the character of wind turbine wakes is strongly influenced by atmospheric conditions, e.g. stability, which is best characterized through high-frequency met mast data or surface flux stations. See Instrumentation for more discussion on the types of observations to be made. 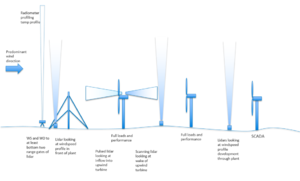 Demonstration of instrumentation deployed in a wind farm.

As is clear from earlier sections multiple data streams will be collected independently by different systems and different project partners. Where possible data streams will be GPS time stamped. However this may not be possible for all systems and thus careful consideration needs to be given to maintaining alignment of those data streams. Eventually all data streams are expected to reside in the DOE Data archive portal. However prior to being uploaded to this portal it is crucial that quality control checks of the data takes place and invalid or suspect data is flagged. It is expected that each data stream will have an owner who will perform this data QC. Each datastream needs to be accompanied with the metadata that allows proper interpretation and use of the data. For each datastream an installation and calibration report will be generated which will include: make, model, serial number, location and orientation of each sensor, derivation of calibration constants, pictures of the installation, calibration sheets (if applicable) 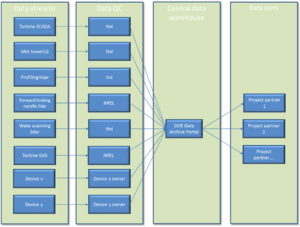 Mentioned briefly in the discussion of potential project Locations, NREL researchers have identified several wind turbine models that would be good candidates for the project. These turbines were identified by researchers a potential fits for the project due to past experience working with them and good access to information regarding their design, operation, and control. Because these are older turbine models, they do not represent the most recent technology, and therefore the domain used most actively in turbine OEM competition, which is expected to lead to more open access for research.

DOE/NREL own a GE 1.5 SLE wind turbine which is located at the National Wind Technology Center. This turbine was installed in 2009 and has been instrumented with a suite of instrumentation to measure performance and mechanical loads and also has a 135 m tall meteorological tower installed in the predominant upwind direction [insert met tower document link]. The turbine is used as a facility for R&D projects. Examples of R&D it has been sued for: Installation of There are ten of thousands of GE 1.5 turbines installed in the US making this one of the most prevalent turbine models in the US. Table 1. GE 1.5 SLE characteristics 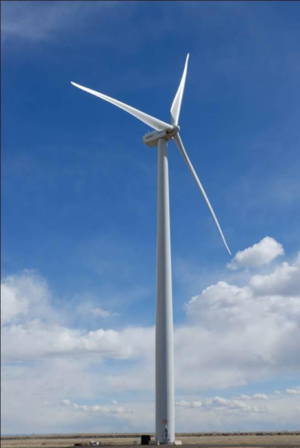 As part of a collaborative research activity between DOE/NREL and Siemens a SWT 2.3-108 wind turbine was installed at the NWTC in 2009. The main objective was to conduct aerodynamics research. As part of this, rotors were installed with 5-hole probes and several sections of pressure taps [Medina et al.] The turbine was further used to validate aero elastic design tools [Srinivas et al] 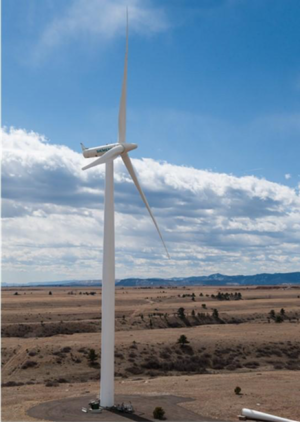 The SWT 2.3-101 wind turbine at the NWTC Photo: PIX24543, NREL.
Retrieved from "https://openei.org/w/index.php?title=AWAKEN/Project_plan&oldid=959675"
Category:
OpenEI is developed and maintained by the National Renewable Energy Laboratory with funding and support from the U.S. Department of Energy and a network of International Partners & Sponsors.