Difference between revisions of "RAPID/Roadmap/14-AK-b"

The Clean Water Act prohibits the discharge of pollutants from a point source into a water of the United States unless the discharging facility has a wastewater discharge permit. The permit limits the types and amounts of substances that can be discharged and sets monitoring and reporting requirements and other provisions to ensure that the discharge does not harm water quality or human health. The Alaska Department of Environmental Conservation has primary authority for issuing most new NPDES permits in the state of Alaska. DEC has the authority to regulate domestic, industrial, storm water, and mining-related discharges of pollutants into surface waters of the United States that are within Alaska or which occur in its territorial seas (within three miles of shore). Under the phased transfer of wastewater discharge permitting authority from EPA to ADEC, EPA retains oversight of oil and gas facilities until October 31, 2011. 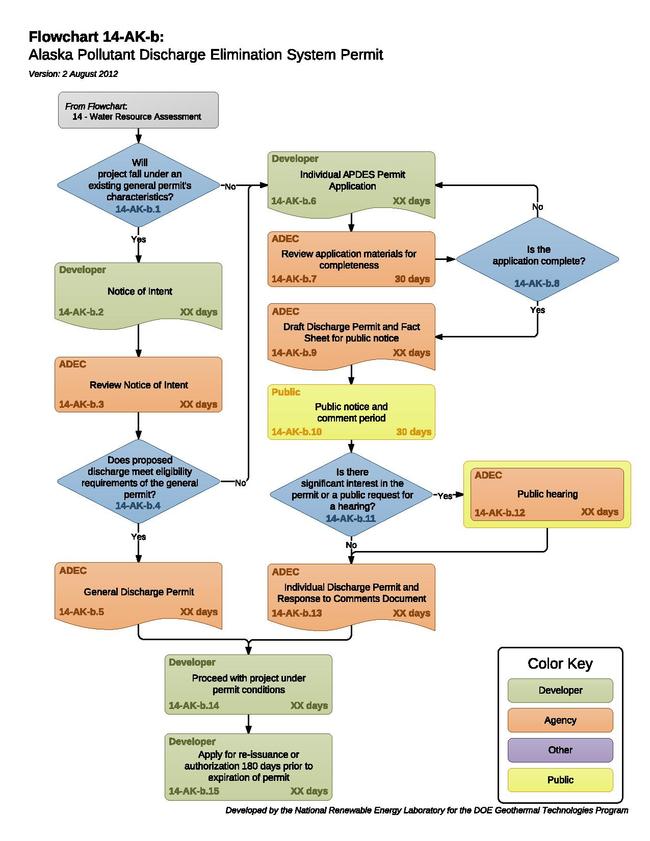 14-AK-b.1 - Will Project Fall Under an Existing General Permit's Characterization

APDES permits establish conditions and limits for the discharge of pollutants from domestic and industrial sources in Alaska. A general permit regulates discharges from more than one facility with similar wastewater characteristics in a defined geographical area (which can be statewide). An operator of a facility that meets the eligibility requirements of the general permit will be authorized to discharge waste after filing a Notice of Intent (NOI) with ADEC, so long as all conditions of the permit are met.

If the conditions for an existing general permit are not met, the developer must file an individual APDES permit application or petition the Alaska Department of Environmental Conservation to issue a new type of general permit.

Each general permit issued by ADEC will specify the contents of the NOI required to be submitted by a developer seeking coverage under that general permit (18 AAC 83.210).

If the proposed discharge does not meet the specific eligibility requirements of the general permit, ADEC will notify the developer that either, they do not require coverage under the APDES system, or the development will require an individual permit.

ADEC will notify the applicant if their NOI has complied with all of the requirements to be covered under the specific general permit. Upon receiving notification that their project is in compliance with general permit conditions, the developer has authority to discharge under the conditions specified in the general permit.

An individual permit is issued to a single facility and its terms, limits, and conditions are specifically tailored to the unique aspects of that facility and the receiving water body.

The ADEC will not review application material unless they are complete and include all applicable required documents and fees.

Notice that a draft permit is available for public review and comment is provided by a combination of mailings to agencies, local governments, and mail lists, newspaper advertisements, online public notice web posting, and other manners constituting legal notice. The public notice initiates a minimum 30-day public review and comment period (18 AAC 83.120(b)). Any unit of local government having jurisdiction over the area within which the facility or proposed facility is to be located must also be mailed a copy of the public notice (18 AAC 83.120(c)(1)(G)). The permit application and a fact sheet describing the terms of the permit are also made available during the public comment period.

Public notice is given through ADEC’s Water Permit Search webpage which allows you to find information about permtis, authorizations and certifications by facility name, site/facility, permit type, owner/operator, permit number, city, or zip code. The preliminary draft permit, fact sheet, and all associated documents will be posted during the 10-day applicant review period prior to formal public notice as well. However, all public comments must be submitted only during the 30-day minimum formal comment period.

ADEC may schedule one or more public hearings on the draft permit if there is significant public interest, to describe the permitting decision, or for other good reason (18 AAC 83.120(l)).

After the close of the minimum 30-day public comment period, ADEC considers information provided by the public, prepares a document summarizing the public comments received on the draft permit, and may make changes to the draft permit. The resulting proposed final permit is made available to the applicant for a five-day review, unless the review period is waived in part or in whole by the applicant (18 AAC 83.120(m)). At the same time, ADEC posts the proposed final permit and supporting documentation on the ADEC web page where it is available to the public.

The developer should proceed with their proposed development of geothermal resources in accordance with all permit conditions including reporting and notification requirements.

14-AK-b.15 - Apply for Re-Issuance or Authorization 180 Days Prior to Expiration of Permit

An APDES permit is effective for no more than five years. The permittee has the responsibility to apply for reissuance of a permit or authorization 180 days prior to the expiration date of the permit. In some cases, DEC may administratively extend a permit beyond five years. If a permit is administratively extended, the permittee is required to continue to follow the permit conditions until the new permit has been issued and to continue to pay annual permit fees.

Retrieved from "https://openei.org/w/index.php?title=RAPID/Roadmap/14-AK-b&oldid=772135"
Categories:
OpenEI is developed and maintained by the National Renewable Energy Laboratory with funding and support from the U.S. Department of Energy and a network of International Partners & Sponsors.