Difference between revisions of "RAPID/BulkTransmission/California/Transmission"

Electrical transmission in California falls under the jurisdiction of three entities: The CPUC, which determines need and is responsible for siting new facilities; CEC, which addresses policy and forecasting in biennial reports, has jurisdiction over establishing new transmission corridors in the state and which licenses thermal power plants over 50 MW; and the California Independent System Operator (CAISO), which annually plans transmission upgrades for and operates as the balancing authority for more than 80% of the California grid. CAISO is regulated by the Federal Energy Regulatory Commission (FERC) and carries out its activities in close collaboration with the CPUC and CEC.

As part of the Western Interconnection, additions and connections to the electrical grid in California are planned as part of the WestConnect and CAISO regional planning entities that were established under FERC Order 1000. CAISO is the West’s only Independent System Operator and collaboratively plans and has responsibility for operating the grid for the state’s investor owned and FERC jurisdictional entities. California publicly owned utilities are organized in WestConnect for regional and interregional planning and cost allocation determinations. They typically plan and operate transmission under the jurisdiction of their local governments or the elected boards of their respective utility or irrigation districts. Both WestConnect and CAISO also participate in interconnection-wide transmission planning under the auspices of the Western Electricity Coordinating Council (WECC).

The Warren-Alquist Act (http://www.energy.ca.gov/reports/Warren-Alquist_Act/index.html Division 15 of the Public Resources Code) designates the Energy Commission as the state's primary agency for energy policy and planning. Every two years, the commission is required to prepare the Integrated Energy Policy Report (IEPR) for the Governor and Legislature. The IEPR addresses transmission needs to meet goals related to electricity and natural gas, transportation, energy efficiency, renewables, and public interest energy research.

Transmission lines 200 kV or greater are required to undergo a two-part state siting and permitting process with the CPUC. One part of the process will analyze the need for the project and consists of obtaining a CPCN from the CPUC. The other part of the process will analyze environmental and community impacts in the environmental analysis for CEQA. These processes can occur concurrently, and typically take more than 18 months.

The overall permitting process starts with the applicant submitting a CPCN application and Proponent’s Environmental Assessment (PEA). The CPCN and CEQA review processes run concurrently, but on separate paths. The application can be protested by outside parties, which would trigger public and evidentiary hearings with an Administrative Law Judge. Uncontested applications would move forward into the CEQA analysis process without having to conduct public hearings. Concurrently, the PEA will be reviewed, and the project will undergo public meetings and review. After the public meetings have taken place, using the PEA as a starting point, a draft Environmental Impact Report (EIR) or Mitigated Negative Declaration (MND) would be developed and issued by the CPUC. An MND is a written statement briefly describing the reasons why a proposed project will not have a significant environmental impact and that the project will not require the preparation of an EIR. P.R.C. § 21064.5 There will be another public comment period on the draft EIR or MND, after which a final EIR or MND would be prepared. An approval decision would be made in both the CPCN and CEQA proceedings, which would again be open for comment and a final decision, would be made and certified.

Local Process
Local jurisdictions do not have siting authority for transmission facilities. 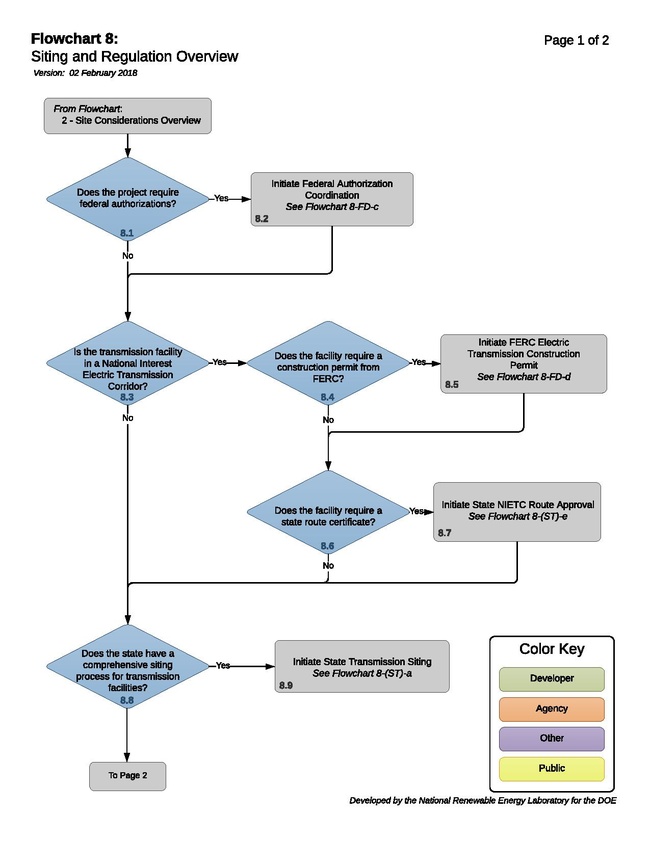 RAPID-Overview(Tech-Jurisdiction-Topic)
Retrieved from "https://openei.org/w/index.php?title=RAPID/BulkTransmission/California/Transmission&oldid=957450"
Categories:
OpenEI is developed and maintained by the National Renewable Energy Laboratory with funding and support from the U.S. Department of Energy and a network of International Partners & Sponsors.