Difference between revisions of "October 31"

1.     We (Paul Cook, LBNL; Florian Soom, LBNL, Patrick Dobson, LBNL, and George Vandine, SURF) took the 7:00 am cage down to the 4100 Level to continue the Step Rate Injections for Fracture In-situ Properties (SIMFIP) in the TV4100 borehole.

4.     We then moved to Test 8 at [7.89 - 10.3m, Fig. 3] (a relatively intact zone with no major fractures). We inflated the packers, deployed the clamps, and noted the compass reading of 150.5 degrees. We then did a low-pressure step rate test (Fig. 4) with ~300 psi pressure steps (bottom section closed) with steps of 450, 600, 900, 1200, 1500, 1100, 900, and 600 psi (the duration of each step was about 1 minute). We then bled off the pressure, and repeated this test two more times. We then did a high-pressure test, raising the pressure and flow rate quickly. Right at the start of the test, we got a response from the SIMFIP that suggested that a hydrofracture was created and opened (Fig. 5). We maintained elevated pressure for 12 minutes, and then proceeded to shut in the system for 24 minutes, and then did a Tom Doe bleed-off with a leak-off rate of ~0.4 L/m. We continued the controlled bleed-off for 15 minutes before bleeding off the system completely. We then decided to repeat this test. Upon starting, we observed a very weird response to elevated pressure – we then bled the system and restarted the high-pressure test, and observed the same signature (Fig. 6). We had two possible explanations for this changed response – one was that the method that we started this second test was slightly different – we began it with the bypass valve, because there was quite a bit of built up pressure in the rock from prior injections; the other idea was that because of all of the prior injections in the borehole, the bottom pressure was elevated, and this might be causing the packers to shift in the borehole. We went ahead with running this test for 6 minutes, then shut it in and did the Tom Doe bleed-off method with a rate of ~0.4 L/m. As the bleed-off proceeded and the chamber pressure dropped, we started noticing strange behavior in the SIMFIP, with cyclic oscillating shifts in all of the fiber signals (Fig. 7). Paul suggested that this might be due to packer slip caused by the elevated bottom pressure in the borehole (~800 psi). We bled off the bottom hole pressure, didn’t see much of an effect, and then checked the compass orientation (149.2 degrees). We bled off the system, bled off the bottom again, repeated the venting, and decided to repeat the previous test to see if what we observed was reproducible.  Upon starting the high-pressure test, we again observed the strange initial fiber response, with a signal that suggested fracture opening that might have y-direction shear. We maintained elevated pressures for 6 minutes, then shut in the chamber and initiated the Tom Doe bleed-off at about 0.4 L/m. After about 15 minutes, the same strange oscillating fiber response seen in the previous test reappeared. We again released the bottom hole pressure, then closed it, and continued the slow bleed-off for 7 more minutes before venting the chamber. We decided to test the hypothesis of packer slip due to elevated bottom hole pressures by venting and reinflating the packers, reclamping, and then running the test again with the bottom hole valve open throughout the test. Upon resetting the packers, the new compass reading was 151.5 degrees. We raised the pressure quickly (using the bypass setup to start the test), and saw more normal fiber responses, with opening and perhaps some shear. We maintained elevated pressure for 5 minutes, then shut in the chamber and initiated the Tom Doe controlled bleed-off at a rate of ~0.4 L/m. During the slow bleed-off, we saw none of the strange oscillating signals in the fiber that were observed in the previous two tests, suggesting that the elevated bottom pressures were responsible for packer slip in the previous tests. We did the controlled bleed-off for 20 minutes, then vented the system.  We decided to run the final pressure step test also with the bottom interval open to avoid the same complications. We did 4 minute steps at 500, 1000, 1500, 2000, 2500, 3000 (shear observed), 3232 (fracture opening observed, with a flow of 2.86 L/m), 3000, 2500, 2000, 1500, 1000, and 500 psi. We then bled off the system, declamped, and depressurized the packers.

5.     We moved the SIMFIP so that it was positioned inside of the cased portion of the well (tape reading of 1.85 m) to do some low-pressure step tests for diagnostics of the SIMFIP tool. We inflated the packers and set the clamps – the compass registered an orientation of 156.5 degrees. We then did short (~1 minute) pressure steps, going from 300, 600, 900, 1200, 1500, 1800, and 2100 psi – at that point, the casing appeared to be leaking, so the system was bled off. We repeated the same test, with the second test ending at 1800 psi due to the casing leak. We then unclamped the SIMFIP, deflated the packers, and manually rotated the SIMFIP tool counterclockwise 180 degrees in the borehole, and then reinflated the packers and clamped the tool. The new compass reading was 326 degrees. We then attempted a similar suite of tests – 1 minute pressure steps starting at 300, 600, and 900 psi, where the casing leak prevented higher pressures. We tested this setup again, going to 300 and then 600 psi – the casing leak ended the test at that point. Paul plans to repeat these diagnostic tests back at the lab using a vertical cased borehole. We then unclamped the tool and deflated the packers. Florian saved and downloaded all of the data onto a memory stick.

6.     We spent our remaining time tidying up the site. We raised the SIMFIP tool so that it was partially out of the borehole, and then spooled up the fiber cable, the pressure gauge cable, the compass cable, and the tape measure. We covered up the wireline winch, and did general housekeeping of the site.

Acts of Safety Florian Soom used a zip tie to secure metal tubing against the drift rib, removing a potential tripping hazard. We spooled up all of the loose cable prior to leaving the drift (Fig. 8). 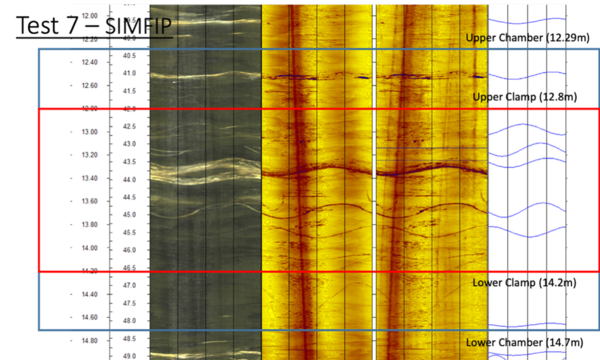 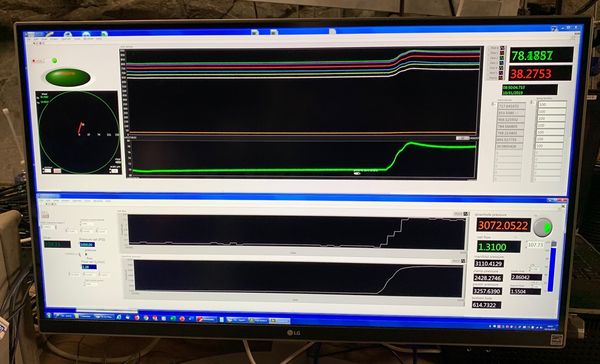 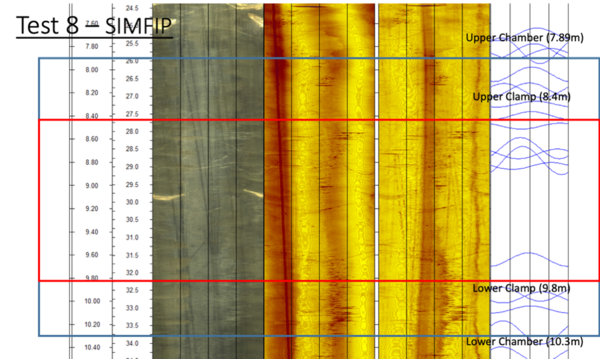 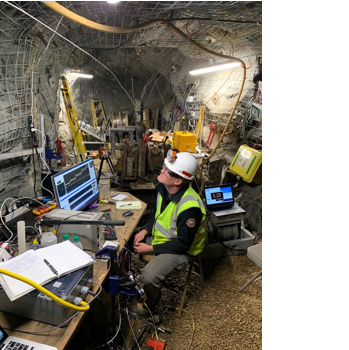 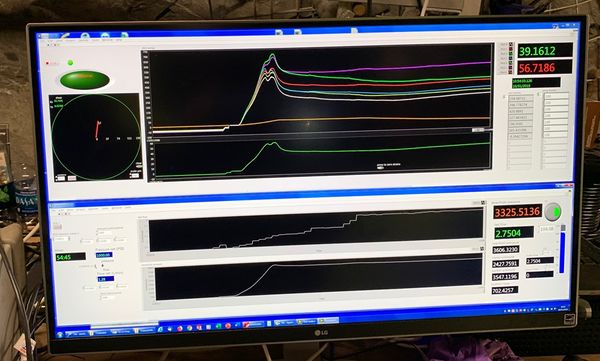 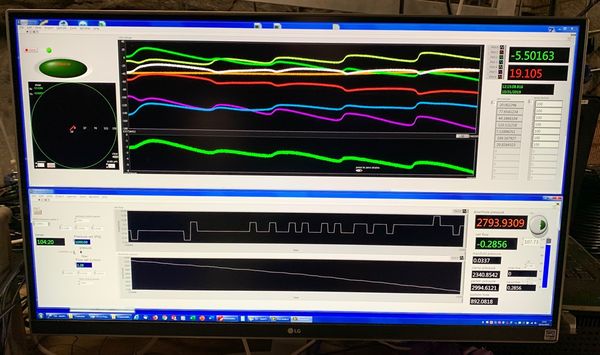 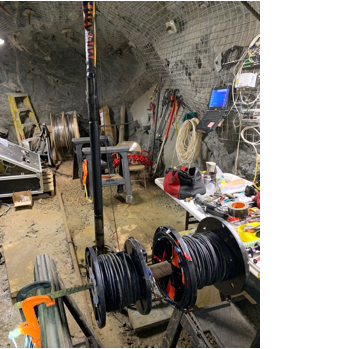 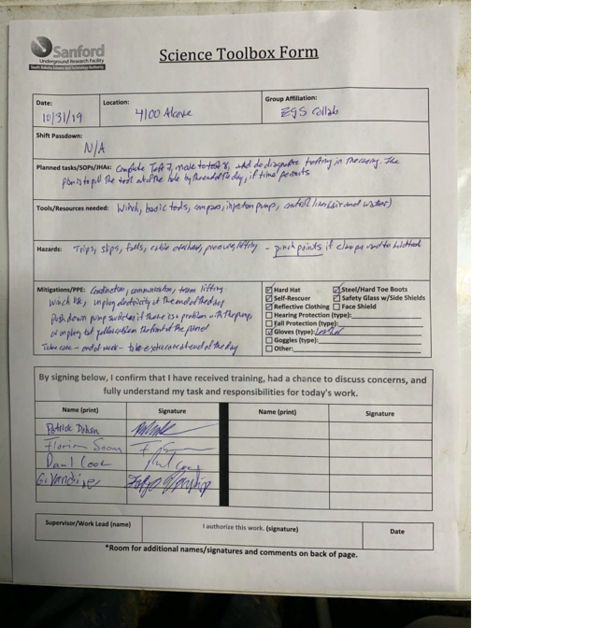 ·      A peristaltic pump was used to circulate the water from the containers through silicone hoses and into a 5-gallon wastewater collection bucket.

·      PH level from each water sample was tested and noted down using PH test strips.

·      Geochem samples were collected from the 4L containers using 50ml Falcon tubes and were stored in a dry ice cooler.

·      Water sample from each container was filtered through Sterivex GP 0.22µm filters, which were immediately stored in a dry ice cooler. 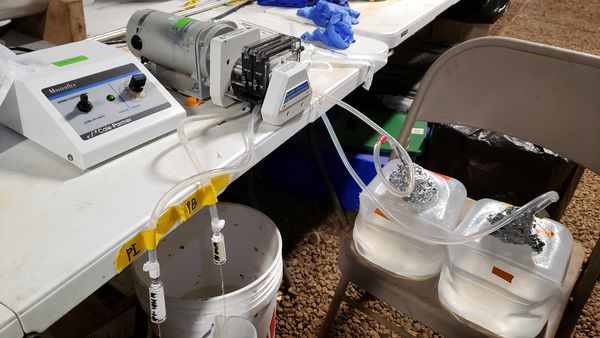 ·      All containers and silicone hoses were sterilized using ultrapure water and 5% Hydrochloric Acid. A face shield was utilized during sterilization.

·      All samples and filters were transported and stored in -80 °C freezer in CCBR lab. 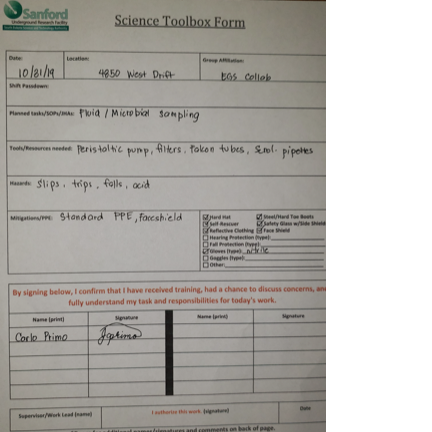 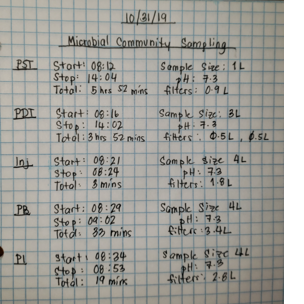 Retrieved from "https://openei.org/w/index.php?title=October_31&oldid=974936"
OpenEI is developed and maintained by the National Renewable Energy Laboratory with funding and support from the U.S. Department of Energy and a network of International Partners & Sponsors.