Difference between revisions of "October 30"

1.     We (Paul Cook, LBNL; Florian Soom, LBNL, Patrick Dobson, LBNL, and George Vandine, SURF) took the 7:00 am cage down to the 4100 Level to continue the Step Rate Injections for Fracture In-situ Properties (SIMFIP) in the 4100m borehole.

3.     We restarted Test 4 at [28.6 – 31.01m, Fig 1]. We had previously conducted a test where the pressure was increased at a constant 0.2 L/min flowrate until it reached a peak value of 3205 psi then slightly decreased, and then held the chamber at elevated pressure for 10 minutes, and then had a planned shut-in overnight. We noticed that during the night, the packers had deflated. We declamped and then reinflated the packers, reset the clamps, then noticed that the packer pressure dropped. We then declamped, deflated the packers, reinflated the packers, and reset the clamps again. We then opened the bottom zone, noticed that the packers continued to decrease in pressure, so we released the clamps, deflated the packers again, reinflated the packers with the bottom zone closed, and prepared to start a build-up test. Paul noticed that the packer bleed valve was leaking, so we abandoned the test, depressurized the packers, and unclamped the system. Paul then worked on the tightening the valve, and we then did a low-pressure step-up test. The compass was oriented at 12.1 degrees. After completing the low-pressure test, we then bled off the system, and began with a high pressure leak off test, getting up to 3200 psi, with a corresponding flow of ~1.3 L/min. Over the 5 minutes with elevated P, we saw the flow increase up to 1.87 L/m. We did not see Z increasing, so perhaps the fracture that was opening was not between the clamps. We then shut in the system for 15 minutes, and bled the off the system. We noted that the packer pressure also decreased down to only 200 psi – we thought that this might reflect a condition of the formation. We then repeated the high pressure leak off test, first raising the pressure up to ~3200 psi, with the flow rate reaching 2.347 L/min at 3160 psi. We shut in this test after 4 minutes, then started the Tom Doe bleed off process, using a bleed off flow rate of ~0.4L/min controlled manually After the bleed-off was completed, we then started a test where we increased pressure step-wise using the bypass valve – with pressure intervals of 500, 1000, 1500, 2000, 2500, 3000, 3172 (where the pressure was stable and opening was observed), 3000, 2500, 2000, 1500, 1000, and 500 psi – each step lasted about 1 minute. We then completed the bleed-off, declamped, deflated the packers, and prepared to move to zone 5.

4.     We then moved to Test 5 at [24.69 - 27.1m, Fig 2] (a previously stimulated hydrofrac zone). We inflated the packers, noticing that the packers were behaving normally again. We clamped the system and noted the compass reading of 33.8 degrees. We then did a low-pressure step rate test with 300 psi pressure steps (bottom section closed) with steps of 600, 900, 1200, 1500, 1200, 900, and 600 psi (the duration of each step was about 1 minute). We then bled off the pressure, and prepared for the high-pressure leak-off test. We increased pressure monotonically with pressure reaching up to 3050 psi at a flow rate of 2.75 L/min – opening was observed with the SIMFIP (Fig. 3). We shut in the system after 10 minutes, and then noticed very little leak-off after an initial pressure drop to 2865 psi. After a shut-in of 21 minutes, we decided to conduct a Tom Doe bleed-off, starting with an initial bleed-off rate of 0.32 L/min, increasing this rate to ~0.84 L/m after 8 minutes. After 11 minutes total, the chamber pressure was still at 2700 psi. Finally, we observed that the pressure started to decline quite a bit faster, with the pressure reaching 1150 psi after a total of 17 minutes, and full bleed off one minute later. We then rezeroed the SIMFIP and started a second high-P test. We noted that there was still some residual pressure in the system. We raised the pressure to 2916 psi at 2.86 L/min and saw a small drop in P and an increase in Z, suggesting a fracture opening. After maintaining the elevated pressure for 5 minutes, we had a brief shut-in, followed by the Tom Doe bleed-off, using a higher rate of ~1L/min, with full bleed-off occurring after about 7 minutes after initiation. We shut back in, saw the pressure rise to 1200 psi, then bled off again, and started the final pressure step test. We did pressure steps of 500, 1000, 1500, 2000, 2500, 3000 (where we saw a bit increase in flow for this step), 2500, 2000, 1500, 1000, 500 psi – each step was ~1 minute in duration.  We then bled off the system, declamped, and depressurized the packers.

5.     We then positioned the probe to conduct Test 6 at [16.49m - 18.9m, Fig. 4] – this test was designed to test cemented fractures that were favorably oriented for shear. We bled and inflated the packers, and set the clamps – the compass setting was recorded at 101.5 degrees. The bottom section was closed, and again the packers were behaving properly. We zeroed the SIMFIP and then started the low-pressure test, with steps at 300, 600, 900, 1200, 1500, 1200, 900, 600, and 300 psi, with each step having a duration of ~1 minute. We then bled off the system, and proceeded with the first high-pressure test. Based on a conversation with Tim Kneafsey, we decided to first go up to a pressure of 2500 psi (which should be adequate to shear, but not to hydrofrac) – this was done using the flow bypass method. We held the pressure at 2500 psi for ~6 minutes, but didn’t observe any opening. We then increased pressure up to ~3300 psi, with a corresponding flow of 1.8 L/min – this flow increased up to ~2.78 L/min a minute later. It appeared that the system underwent compression, perhaps suggesting that a fracture outside of the clamps was opening. We then saw the system starting to stretch with a corresponding pressure drop, perhaps indicating that another fracture between the clamps was beginning to open. We shut in the system for 21 minutes, and then started the Tom Doe controlled bleed-off with a bleed-off flow rate of ~1L/min – this resulted in a fairly rapid pressure drop off, so we reduced the bleed-off rate to ~0.8 L/min. After the bleed-off was completed, we closed the valves, and noted the chamber pressure increased fairly quickly, so we continued to bleed off the system.  We then initiated a second high-pressure test, once again raising the pressure initially to 2500 psi using the bypass system. We held this pressure for about 6 minutes, with a recorded flow of ~0.23 L/min, and then raised the pressure to 3134 psi with a corresponding flow of 2.78 L/min (bypass closed). We saw the feature opening up, with a ~15 micron Z increase with no pressure increase over a 5 minute period. After 10 minutes at this pressure, we then shut in the system and did a Tom Doe bleed-off with an outflow rate of ~0.4 L/min – the pressure decreased after 11 minutes to a value of 1130 psi, with the pressure down to baseline two minutes later. After some additional time to let the system bleed off more, we then conducted a stepped pressure test using longer steps (based on a suggestion from Yves, who noted that this could capture Tim’s suggestion to attempt to see if shear occurs at lower than frac pressures). We did four minute steps this time, with steps at 500, 1000, 1500, 2000, 2500, 3000, 2500, 2000, 1500, 1000, and 500 psi. For the highest pressure step (3000 psi), we did see opening and possible shear. We then bled off the system, declamped, and deflated the packers.

6.     We then moved the assembly in position to start Test 7 [12.29 m - 14.7 m, Fig. 5]; this zone was selected because one of the mineralized fractures in the core appeared to have some porosity. We inflated the packers and set the clamps – the compass reading was 129.5 degrees. We started by conducting the low-pressure step test, with one minute steps at 300, 600, 900, 1200, 1500, 1200, 900, 600, and 300 psi. After bleeding off the pressure, we then rezeroed the SIMFIP and started a high-pressure test. The pressure and flow increased quickly to values of 3340 psi and 1.4 L/m – these values then stabilized at around 3365 psi and 1.75 L/m. During the 10 minute duration of this elevated pressure, we some opening occurring with the SIMFIP, with a few minor pressure decreases and increases. We then shut in the pressure for an overnight shut-in test. This test will be continued on Thursday.

Acts of Safety George Vandine replaced the light by the sump pump to improve the lighting in the drift near our work area. 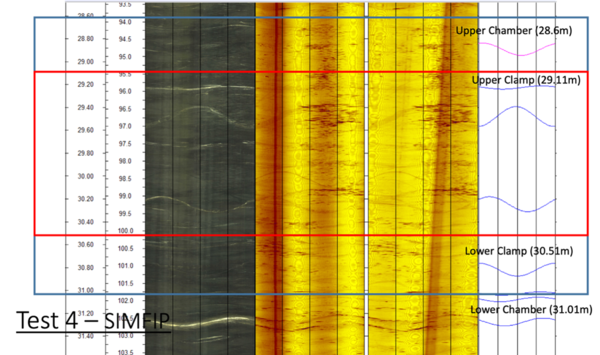 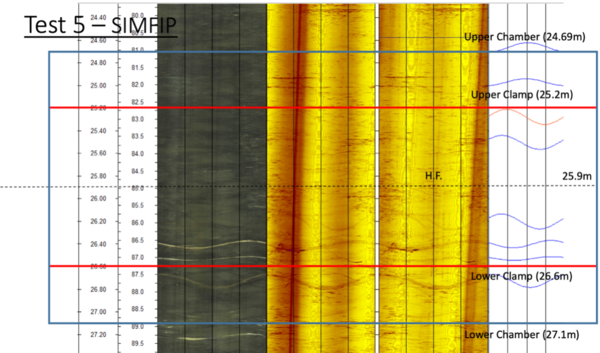 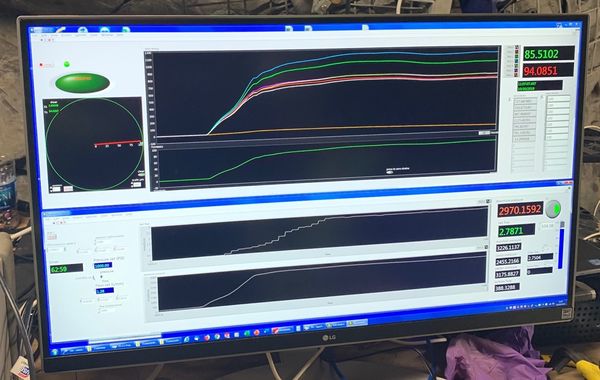 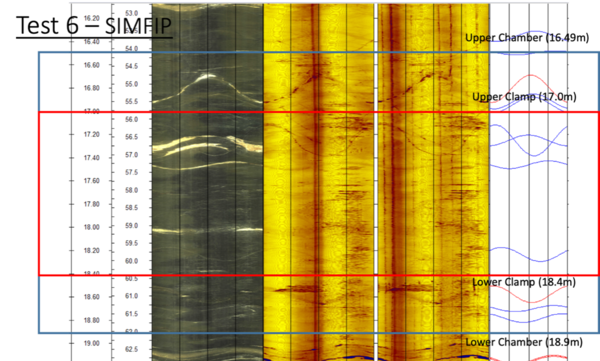 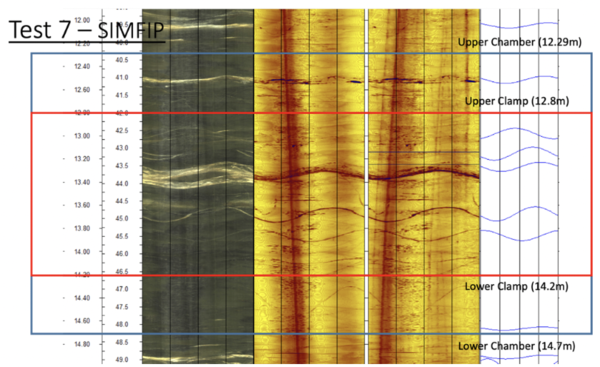 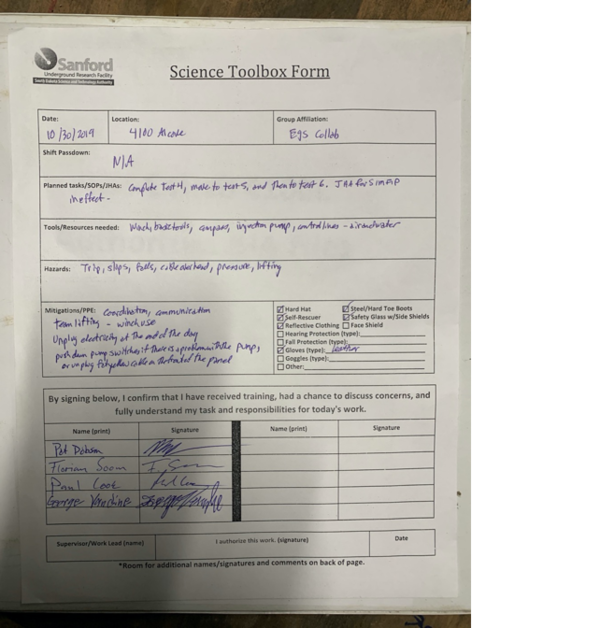 Retrieved from "https://openei.org/w/index.php?title=October_30&oldid=974912"
OpenEI is developed and maintained by the National Renewable Energy Laboratory with funding and support from the U.S. Department of Energy and a network of International Partners & Sponsors.