Concentrating solar power (CSP) offers a utility-scale, firm, dispatchable renewable energy option that can help meet our nation's demand for electricity. CSP plants produce power by first using mirrors to focus sunlight to heat a working fluid. Ultimately, this high-temperature fluid is used to spin a turbine or power an engine that drives a generator. And the final product is electricity.

Smaller CSP systems can be located directly where the power is needed. Larger, utility-scale CSP applications provide hundreds of megawatts of electricity for the power grid. Both linear concentrator and power tower systems can be easily integrated with thermal storage, helping to generate electricity during cloudy periods or at night. Alternatively, these systems can be combined with natural gas, and the resulting hybrid power plants can provide high-value, dispatchable power throughout the day.

These attributes—along with world-record solar-to-electric conversion efficiencies—make CSP an attractive renewable energy option in the southwestern United States and other sunbelts worldwide. 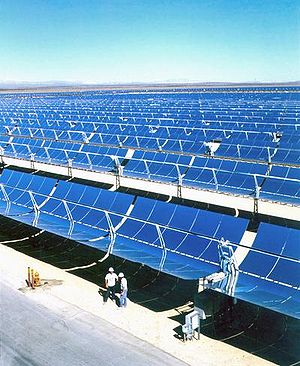 Linear Concentrator Systems collect the sun's energy using long rectangular, curved (U-shaped) mirrors. The mirrors are tilted toward the sun, focusing sunlight on tubes (or receivers) that run the length of the mirrors. The reflected sunlight heats a fluid flowing through the tubes. The hot fluid then is used to boil water in a conventional steam-turbine generator to produce electricity. There are two major types of linear concentrator systems: parabolic trough systems, where receiver tubes are positioned along the focal line of each parabolic mirror; and linear Fresnel reflector systems, where one receiver tube is positioned above several mirrors to allow the mirrors greater mobility in tracking the sun.

A dish/engine system uses a mirrored dish similar to a very large satellite dish. The dish-shaped surface directs and concentrates sunlight onto a thermal receiver, which absorbs and collects the heat and transfers it to the engine generator. The most common type of heat engine used today in dish/engine systems is the Stirling engine. This system uses the fluid heated by the receiver to move pistons and create mechanical power. The mechanical power is then used to run a generator or alternator to produce electricity.

A power tower system uses a large field of flat, sun-tracking mirrors known as heliostats to focus and concentrate sunlight onto a receiver on the top of a tower. A heat-transfer fluid heated in the receiver is used to generate steam, which, in turn, is used in a conventional turbine generator to produce electricity. Some power towers use water/steam as the heat-transfer fluid. Other advanced designs are experimenting with molten nitrate salt because of its superior heat-transfer and energy-storage capabilities. The energy-storage capability, or thermal storage, allows the system to continue to dispatch electricity during cloudy weather or at night.

Retrieved from "https://openei.org/w/index.php?title=Concentrating_solar_power&oldid=972452"
OpenEI is developed and maintained by the National Renewable Energy Laboratory with funding and support from the U.S. Department of Energy and a network of International Partners & Sponsors.